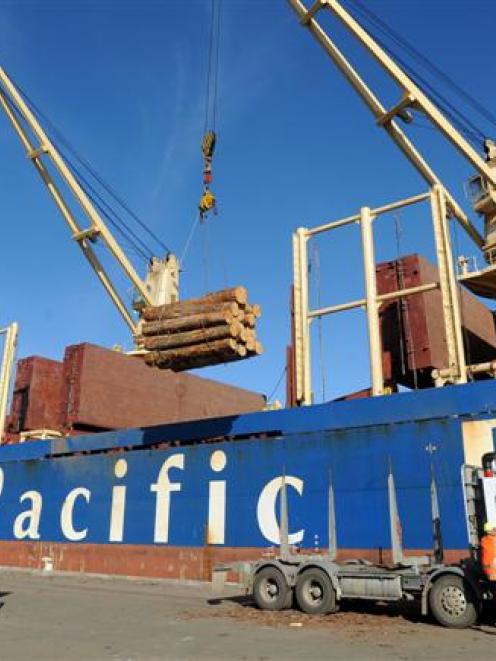 Logs are loaded on to the 'Mount Rainier' at Leith wharf yesterday. Loading was to finish last night and the ship was due to sail this morning.
Logs have been loaded on to a ship at Leith wharf this week for the first time in about 35 years as Port Otago deals with a "phenomenal" demand for logging exports.

Since Tuesday, workers have been loading logs on to the Shanghai-bound Mount Rainier 24 hours a day.

Dunedin shipping writer Doug Wright said the last ship to be loaded with logs at the wharf was Regent Marigold in 1974.

Port Otago commercial manager Peter Brown said it was a rare occurrence to load a logging ship from the inner-harbour wharf, but the phenomenal demand for exporting logs meant the company was looking at other options. Leith wharf also had the bonus of a nearby storage yard. 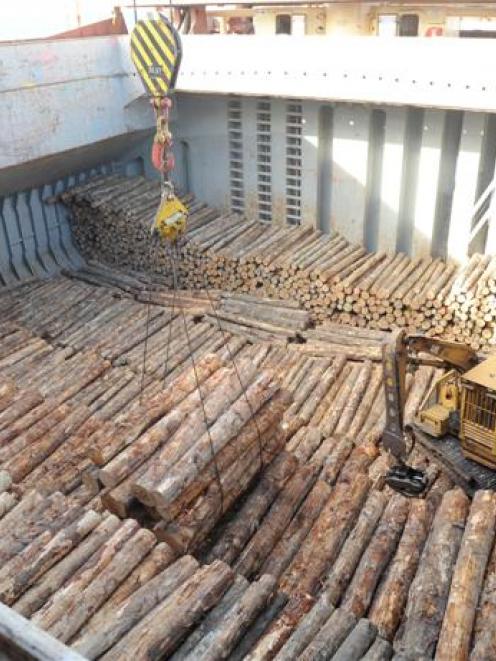 The logs that have been loaded into the hold of Mount Rainier this week. Photos by Craig Baxter.
"It relieves some of the pressure at Port Chalmers and gives another avenue for exporters to use."

Its use was restricted to ships making Dunedin their first port of call, because of the depth of the channel.

"For shippers able to be flexible, the Leith wharf is a good option."

If the wharf's use was judged successful, four or five ships a year could load from it, he said.

Matrex Global New Zealand log procurement manager Robert Watson said 10,000cu m of China-grade logs were being loaded on to the ship before it headed to Bluff and then Marsden Point for more logs.

"There was a lot of apprehension about coming right up into the harbour to load logs."

In a first for Dunedin stevedores, the logs were being loaded off trucks, and the loading rate was extremely good. Mr Watson said he believed the operation had been quiet and everybody had been happy with how it had gone.

Mount Rainier sails about 9am today.