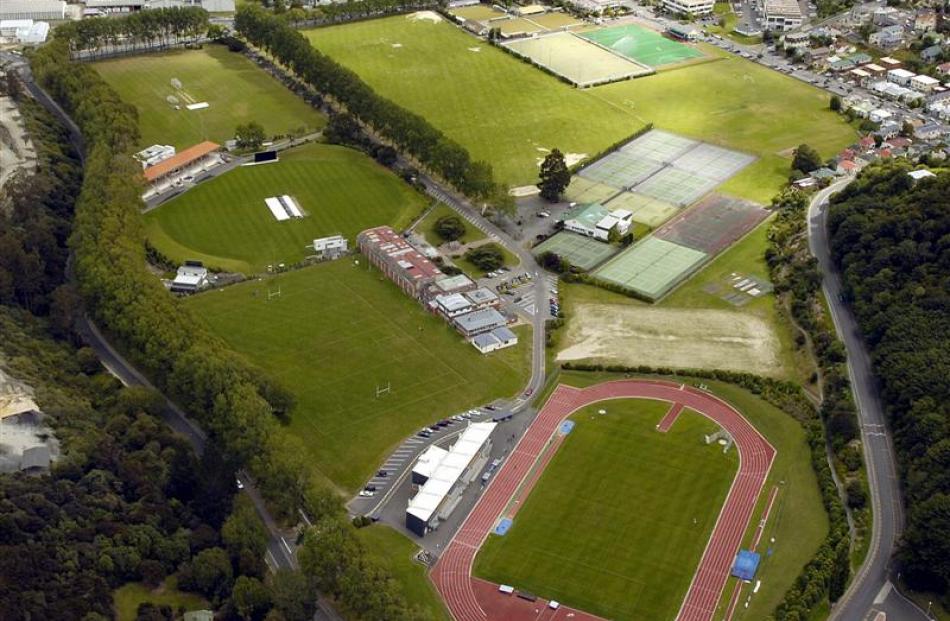 An aerial shot of Logan Park, including the row of poplars. Photo by ODT.

As the chop looms, plans to remove 12 established poplars in Logan Park Dr have fired up Dunedin residents, some of whom say the decision appears to be out of the blue and even ''horrifying''.

But the Dunedin City Council says the removal of the trees, which will come down next week, is part of a 2007 plan to redevelop Logan Park.

This included the eventual removal, and partial replacement, of the entire avenue of poplars.

The original plan was to remove the 12 Ontario poplars about five years ago, but the move was delayed for various reasons.

The council says the trees are to be removed mainly because they shade the University Oval cricket ground and because the space is needed for sports fields.

Many people have contacted the ODT since Tuesday's story about felling the trees.

It is understood council staff have also received calls.

Concerns aired range from a loss of ambience, to whether the options had been fully canvassed, to giving in to sporting codes' demands and confusion about process.

Stephen MacKnight, of Dunedin, said the trees significantly added to the character of Logan Park, and the University Oval in particular, and their removal would greatly affect that.

''This is perhaps the third most significant avenue of trees in the city, behind maybe the Octagon and Anzac Ave,'' he said.

Grant Motion, who regularly ran through the park, said he was ''horrified'' to read of the council's plan to ''destroy'' the trees ''under the smokescreen'' of Otago Cricket's request.

But council parks manager Lisa Wheeler said the park was for sports use and the plan to remove the trees was agreed as part of the original Logan Park development plan, adopted in 2007 after public consultation.

The process identified several issues and concerns with the age, stability and allergenic potential of the trees, which prompted the council to commission a specific Logan Park tree management plan.

Park users were fully consulted over the plan.

An extract of the tree plan seen by the Otago Daily Times recommended removing the 12 trees and a gum tree in front of the tennis courts, within one to three years.

The plan says the trees were causing shade/light problems for cricket, shortening late afternoon play, were allergenic, were nearing the end of their useful life, and their removal would free up space for the sports fields.

It also recommends that with-in four to 10 years the trees on the eastern side be removed and the remaining 16 Ontario poplars south of the Uni-versity Oval gates be under-planted with tulip trees.

Once those were established, those poplars should also be removed.

Otago Cricket has approached the council for each of the past three years, asking it to bring forward the removal of the initial 12 trees because of the shading issue. In 2013 councillors instructed staff to find a way to do that, at no cost to the council.

That was unachievable, but Ms Wheeler said some funding not used last year made it possible to remove the trees.

The decision was partially a response to Otago Cricket's concerns and also because of continued demand for more field space at the city's most used sports facility.

The sports field directly in front of the trees was under-sized in length by 10m.

Once the trees were gone, it could be repositioned, resized and used for rugby matches, rather than just training.

An option to prune the trees was considered, but deemed not viable due to the extent of work required.

No consent was required to fell the trees because they were considered to be a shelter belt.