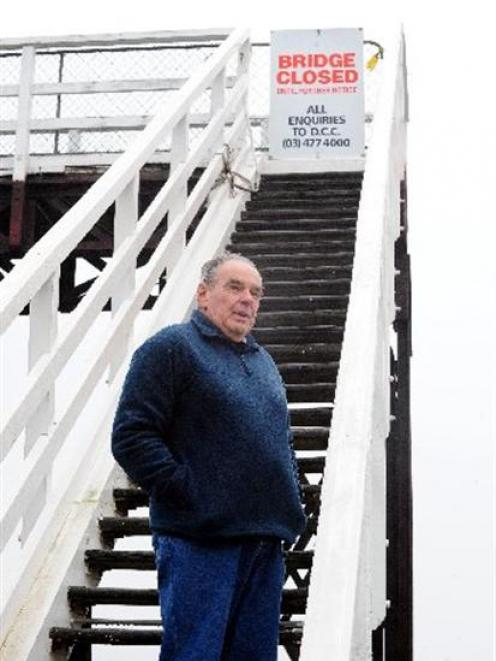 Ravensbourne resident John Rodgers is upset the Ravensbourne overpass has been shut for nearly a year. Photo by Craig Baxter.
The Dunedin City Council is under fire for closing a historic railway pedestrian overbridge for safety reasons, and admits confusion about whether it has responsibility for its maintenance.

The Ravensbourne pedestrian overbridge, which provides access to the West Harbour walkway-cycleway, has been closed for nearly a year.

The situation has frustrated the Chalmers Community Board, which has written to DCC chief executive Jim Harland asking him to resolve it.

The Otago Regional Council upgraded and raised the overbridge, to allow the passage of higher railway containers.

The upgrade was part of the harbour cycleway-walkway project.

ORC corporate services manager Wayne Scott said the project was approved by an engineer in late 2006.

However, DCC transportation operations policy engineer Pieter Besuijen said a lack of documentation meant it was difficult to tell if the overbridge was the DCC's responsibility or not.

An engineers' report, which followed a complaint from the public, showed there was deterioration of steel and woodwork, which could cost more than $100,000 to fix.

The overbridge was consequently closed.

Transportation operations manager Graeme Hamilton suggested the confusion was caused by a lack of communication between council departments.

The DCC needed to "back-track and clarify" exactly what it had agreed to do in relation to the bridge.

Ratepayers' money was at stake, so the council needed to be very careful it did not carry out maintenance on an asset for which it did not have responsibility, Mr Hamilton said.

Chalmers Community Board member John Neilson said the community was increasingly frustrated with the delay.

Next month it would be a year since the closure, he said.

The ORC's upgrade had been essential, because of the danger posed by trains carrying modern rail containers, he said.

The Ravensbourne bridge was the only surviving Edwardian lattice trussed overbridge in Dunedin.

The situation appeared to be an "impasse" between the the relevant authorities, and smacked "a wee bit of bloody-mindedness", said Mr Neilson.

The regional council formally advised the Chalmers Community Board last week that the overbridge was the DCC's responsibility.

Local resident John Rodgers was disgusted at the delay.

Pedestrians and cyclists were forced to use a driveway shared by trucks entering the adjacent industrial park, which was unsafe.