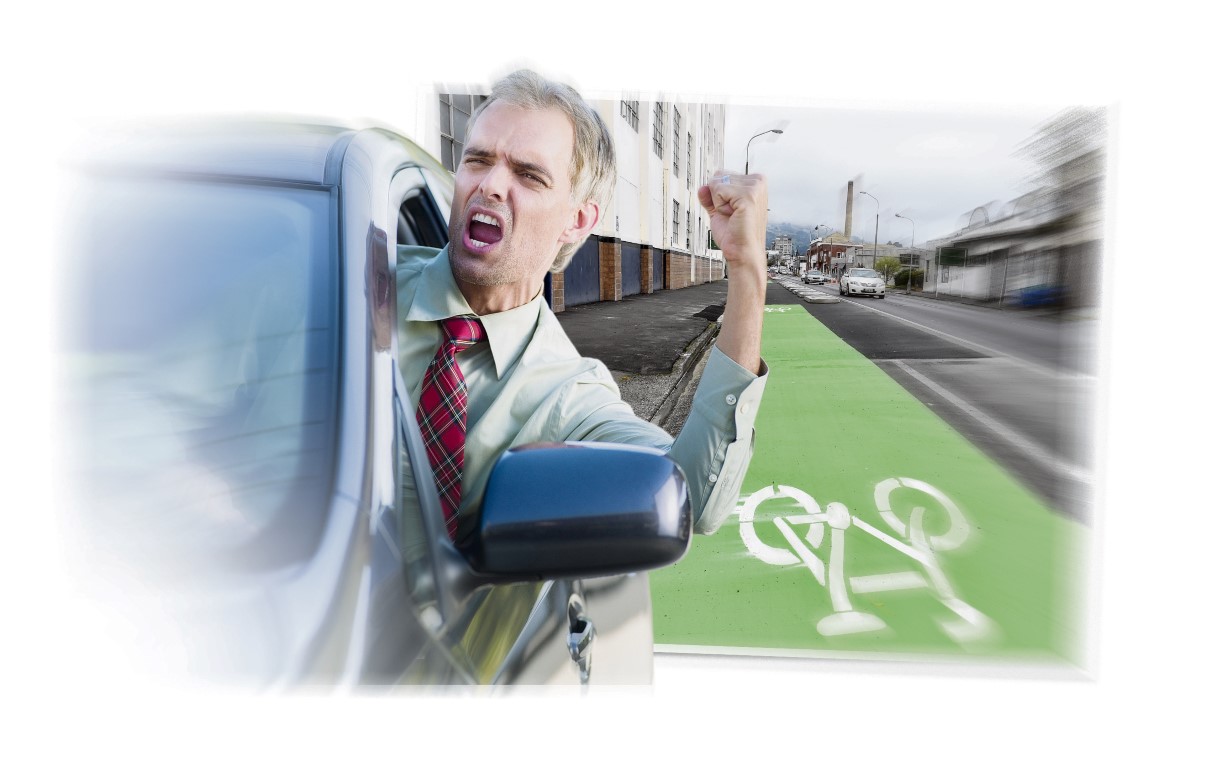 We've taken a look through our archives and picked a few of our best and most popular stories from 2018. We will be publishing some of them over the summer holiday period and here is one that made the cut:

Dunedin has been awash with rage of late. Is the cause despotic world leaders, climate change or unnecessary human suffering? No, it is not.  As David Loughrey discovers, it is all the fault of cyclists.

Dunedin awoke in  a lather. The city rolled over in a bind of knotted sheets, sweaty and confused. 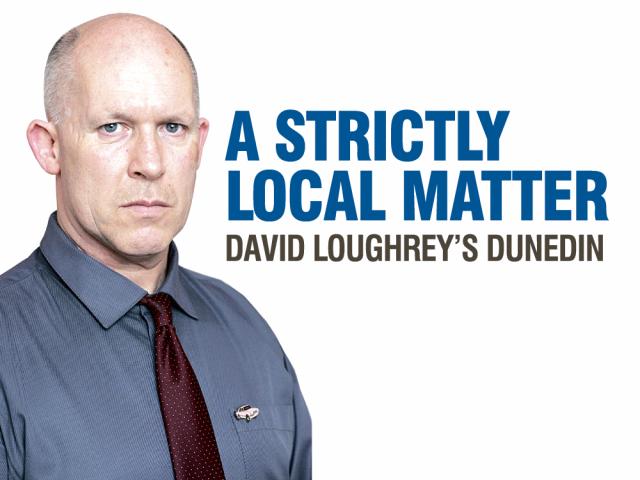 It opened its crusty eyes, the pupils dilated and whites a reddened mess of hemorrhaged capillaries.

There was something the matter.

From deep within a pit of barely repressed and frenzied emotion it began to boil and seethe.

There was something dark inside, and if it was left unexpressed it would most surely blow.

It was rage; a rage so white-hot and pure it could almost take form and consume the region.

And there could be just one reason; cyclists and their infernal cycleways.

This is how it happens.

You’re on the way to work.

On the radio the voice of the newsreader drifts in and out of your consciousness as you drive towards the city with the other commuters on a spring morning.

There are stories about the government, about petrol prices, about the weather.

US President Donald Trump is celebrating.

He calls sex assault claims made against new Supreme Court Justice Brett Kavanaugh a hoax, all made up.

Mr Kavanaugh swears an oath at the White House, and Trump hails it a "momentous’’ occasion.

In Brazil a far right politician with a long history of offensive remarks about women, blacks and gays does very well in an election.

You adjust your glasses and start thinking about the day ahead, you sweep around the corner on to State Highway 1 and then you see it; a cycle lane.

It has green bits and concrete barriers between cyclists and cars with natty little designs on them and, damn it, the road isn’t quite as wide as it used to be and there aren’t as many parks and there’s one cyclist not using the cycle lane and when you get near them you have to slow down for up to two seconds before you can pass and a righteous and passionate fury begins to rise within you.

Your legs begin to twitch uncontrollably and one of your eyes starts blinking of its own accord and your teeth grind together so hard they chip and crack and impotent tears of rage invade your eyeballs.

Cyclists have ruined your day.You get closer to town.

Someone on the news starts banging on about the latest Intergovernmental Panel on Climate Change report. The report is unequivocal; the climate is changing now. The changes are already affecting human wellbeing through extreme weather events and sea level rise, and there are likely to be more far-reaching losses affecting coral reefs and Arctic sea ice.

Perhaps 10 million people will be affected by sea level rise alone and another 420 million  by heat stress because of fossil fuel emissions in the atmosphere.

Nothing to worry about.You begin to relax again.

Then you see a cyclist on the cycleway.

Cyclists are so arrogant, expecting their own lane.

You don’t expect a special lane for your car, there just is one, that is the natural order of things.It doesn’t cost a thing.

But you personally have paid thousands of dollars for these cycleways through your taxes or rates or something because the government or the council or someone, you are not really sure who, forces you to.

It’s like they are trying to discourage the use of cars and make cycling more attractive and less dangerous.

Why would they do that?!

The whole thing is inexplicable, and your hand begins to shake and your eyes cloud over as the rage takes you again, transporting you to a paroxysm of foul temper that threatens to inhabit your whole being and tear your fragile psyche limb from limb.

Cyclists have ruined your week.

You try to pull over to the side of the road to catch your breath, psychologically speaking, but there is a cycleway there, and you have to wait between two and three seconds before you find a spot to park.

You are in a state of twisted near-insanity.

You try to calm down and force yourself to indulge in a little introspection.

The anger has become all-consuming.

You can no longer function, no longer speak to your family and friends without yelling at them.

Could this somehow be something to do with your own inability to control your emotions?

Could it be a response to some pain or trauma in your life you have been unable to deal with, for which you lack the skills to cope?

Could your anger be a substitute emotion you use to stop yourself feeling pain, because for some reason it feels better to be angry than it does to be in pain?

Is this whole thing you have with cyclists merely a distraction from the realities about yourself you are unwilling to deal with?

Is it a smokescreen for your feelings of vulnerability that provides you with a sense of righteousness and moral superiority that is somehow comforting?

Life is complex and confusing, paradoxical and frightening, in so many ways unknowable and ultimately fatal.

Maybe that has something to do with it.

You see a cyclist, and you begin to cry; great wrenching sobs wrack your body and double you over on to the steering wheel as every repressed feeling rips bloodied and vicious to the surface.

And it becomes clear.Your problems are nothing to do with some nameless internal malaise.It’s cyclists and cycleways.

They have ruined your life.

Too long to read, IMHO the problem is the management, as in the DCC lack off, creation as in the creation of the stuffed cycle lanes, lack of management, accountable lack of accountability by rouge cyclists and DCC, Ownership lack of ownership of stuffed up cycle lanes by DCC and Ownership of cyclists owning and using them all piled on top of Greens who hate anything modern and made from oil ( they should be naked0. and the cherry on top is a Mayor who is out of his depth, or lost possibility both.

I suggest taking the time to read it. It may well be describing you, or someone you know.

Cheers, Mehavesnoname not anti cyclists always look out for cyclists being a ex cyclist myself . just wish cyclists would use the lanes and they were planned and implemented correctly and money not wasted - they are a joke compared to other cities around the worlds, I'm lucky enough to work from home.

It's the 'rouge' cyclists. You could drive into a Moulin.

Very well worded description of the many anti-cycleway/cyclist bemoaners out there. It's enough to put you off social media at times, they take every opportunity to vent about something so 'trivial'. :(
Yes it costs a lot of money for cycle lanes, but they are making them because motorists are not making it safe enough for cyclists - so it's motorists own doing really! 100% true, just think about it before you dispute this fact.

I'd suggest to anti-cyclist motorists to jump on a bike themselves and try out these cycle lanes, but they might come back at me and say there are too many angry/crazy motorists out there...

Have you ever witnessed some of the Lycra clad mafia running red lights, taking up more than needed of the road, impeding traffic causing drivers to make dangerous decisions , riding in groups some times 3 deep. In warmer climates some of them stop at a cafe for breakfast and a coffee after a ride and litter the footpath with bikes. Respect goes both way. At a guess the above might describe 'Mehavesnoname' to be fair it is not Trivial because if a vehicle hits a cyclist it is the cyclist who comes off the worst, the driver who gets charged and the driver who has to live the rest of his or her life feeling guilty that they hit a cyclist. its a no win situation IMHO as soon as police start to charge these rouge cyclists and drivers the better off we will all be- why because it will stop this BS.

Cycling...we only do it to make motorists miserable;). Looks like we are very successful too.