The annual Bird of the Year competition starts late this month. David Loughrey argues it might be time to look beyond the hoiho or the albatross, asks what avian success really looks like, and says quite unnecessarily cruel things about some popular local birds.
The mighty, the majestic, the fearsome hawk, with just a barely perceptible adjustment of its upswept wings, tips earthward and circles ominously.

Like a murderous kite on a devil's string it drifts, a menace in the updraught, before its peeled and brutal eyes spot the prey.

There, on State Highway 1, is a possum perhaps, or a hedgehog, maybe a stoat, its viscera spread scarlet across the tarmac following an untimely and ultimately fatal meeting with a truck tyre.

And death is no obstacle for a predator for whom carrion is a delicacy rather than an unpleasant necessity.

It swoops, a whirling dervish of feather and vicious talon, digging deep, tearing into bone and sinew, its beak red with muscle and blood as it reaps the grim reward of another's violent demise.

I give you the Bird of the Year; Circus approximans, the harrier hawk.

Not for us this year past winners like that bloated clown, the kereru, the forest-bound kokako or the tiresome dun-coloured migrant, the bar-tailed godwit.

This year it is time to celebrate the power and cruel majesty of the predatory bird that reigns supreme over the nation's highways, wheeling solitary, savage and superior through invisible air currents high above the asphalt.

Forest and Bird's Bird of the Year contest is almost upon us, voting opening at 9am on Monday, October 28 and closing at 5pm on Sunday, November 10.

And if you are considering voting for lesser species like the hoiho (yellow-eyed penguin), a stumbling, ridiculous parody of itself, or that trumped-up, fatuous, overblown seagull, the albatross, here are some facts to bear in mind.

Hawks, or kahu, don't just fly about looking cool and being mean.

Apart from making a tasty banquet of the dead, they also like a spot of live prey, introduced pests like mice, rats and rabbits, providing a level of control over those vile invaders.

They clear carcasses from roads and paddocks, something that benefits road users and farmers.

Yes, they are said to take unprotected poultry and game birds, tearing them to shreds and feasting on their quivering bones, they rip into reptiles, frogs, and fish, and they possibly also kill newborn lambs in some circumstances, but hey, a bird's gotta eat, right?

And don't forget the harassment the hawk has to deal with.

As a generalist predator hawks are ceaselessly harried by the likes of magpies and spur-winged plovers.

But most of all the hawk is unapologetically wild, brutal and untamed, a product of nature in all its wanton fury.

So when you come to consider where to cast your ballot in the most important bird-related election this year, spare a thought for the mighty New Zealand raptor.

Look out for them in Dunedin's surrounds, particularly that piece of road just north of Waihola, where these magnificent creatures abound, or floating free and untethered above the emptiness of the Maniototo.

Appreciate them for their wild splendour.

Then vote for them.

The hawk really is the Bird of the Year.

But Don't Forget the Sparrow

They won't win Bird of the Year again this year, and there's no point pretending they will, no matter how hard one tries to hack into the Forest and Bird computer system and skew the results.

But the ubiquitous little brown birds may also be an overlooked force by those who imagine themselves knowledgeable about all things avian.

How do we judge the success of a bird, and in what situation should we afford them national honours?

The slightly disappointing looking and abundantly boring bird arrived in New Zealand in the mid-1860s, bred like mad, were hailed as the answer to combating plagues of agricultural pests, and in a few short years (you've heard this story before) were regarded as pests.

Sparrows could be described as the gorse or broom of the sky.

They don't have a terrific song, they're brown, they have ugly beaks and nasty little claws, they fight with each other at the bird feeder, they probably don't "get" modern art or architecture, and they display an ugly and unnecessary competitiveness that does nothing for their likability ratings.

But if we value success as a nation, we must appreciate the humble house sparrow's accomplishment as a species.

They love to fly about in supermarkets.

They are a common breeding species as far away as the Chatham Islands, and have been found on the Snares, Antipodes, Auckland and Campbell Islands.

So who is a winner now, Forest and Bird?

Perhaps all sparrows need is a little good PR, perhaps the development of a citizen-led support group, perhaps named something like the Sparrow Appreciation League, which could hold workshops and rallies and even promote art and writing competitions that engender a positive attitude towards sparrows.

Perhaps that would tip the scales in favour of this plucky little immigrant who pulled itself up by the bootstraps by eating everything, made the most of an association with arable farming and human habitation, and bred like rampant little rabbits with wings. 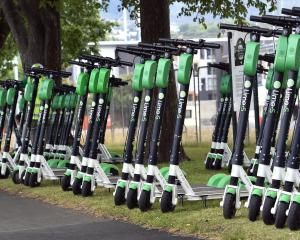 One time, we voted for the Stormy Petrel, which wasn't even a bird, but an argumentative fella wearing a cloak.