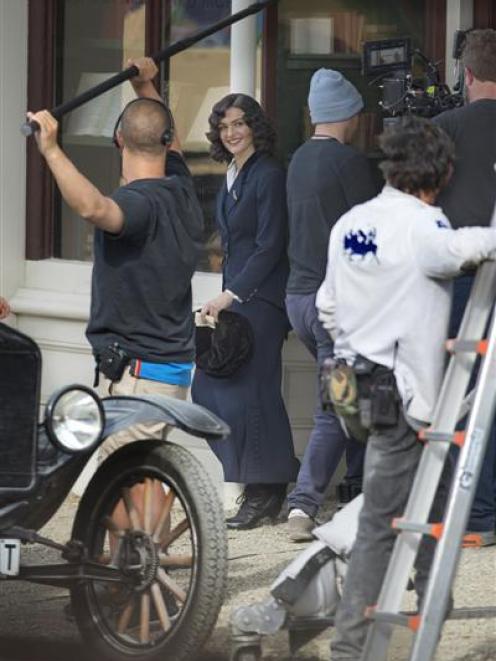 Actress Rachel Weisz, at Port Chalmers, filming The Light Between Oceans earlier this year. Photo by David Milton Browne.
More than 400 films have been shot in New Zealand over the past 75 years - from Rewi's Last Stand (1939) to Z for Zachariah.

Reporter Hamish McNeilly grabs some popcorn and has a look at the industry.

Coming to a screen near you. Slow West, The Light Between Oceans, Z for Zachariah, and Pete's Dragon.

Filmed, or in the case of the last, about to be shot, in Twizel, Dunedin, Methven and Tapanui respectively.

International film productions are increasingly being lured to southern New Zealand by its scenery, equipment and crew, and not to mention incentives on offer.

This month the Otago Daily Times revealed veteran Hollywood actor Robert Redford will star in the Walt Disney live action film Pete's Dragon, to be shot in the West Otago township of Tapanui next year.

Producer Barrie Osborne noted New Zealand's screen incentives when announcing the movie would be shot around the country.

Confirmation of that incentive came with the announcement that the three Avatar sequels would be made in New Zealand.

At that December 2013 announcement Prime Minister John Key said the three films would pump a minimum of $500 million into the economy.

Film director James Cameron said the offered rebates, coupled with the local workforce and skills was a major incentive for basing the films in New Zealand.

However he noted he would have liked to have seen even higher rebates than the 25% on offer.

The New Zealand Film Commission was unable to provide a figure to the Otago Daily Times on how much those incentives have cost the taxpayer, or any cost-benefit analysis.

''As the grants have been in place for less than a year, the economic impact has not yet been evaluated,'' Ms McSweeney said.

She noted feedback from production companies indicated the incentives and New Zealand as a destination ''has increased interest in filming here''.

''Additionally, New Zealand crews have an international reputation for being skilled, resourceful and passionate about their craft.''

Local productions released this year include The Dark Horse, The Dead Lands, Housebound and What We Do In the Shadows.

Ms McSweeney said that had helped with the sustainability of the local industry and more co-productions were targeted.

Two of the films selected to screen at the Sundance Film Festival next year, were New Zealand co-productions, Turbo Kid (with Canada) and Slow West (with the United Kingdom). To date, 413 films have been shot in New Zealand.