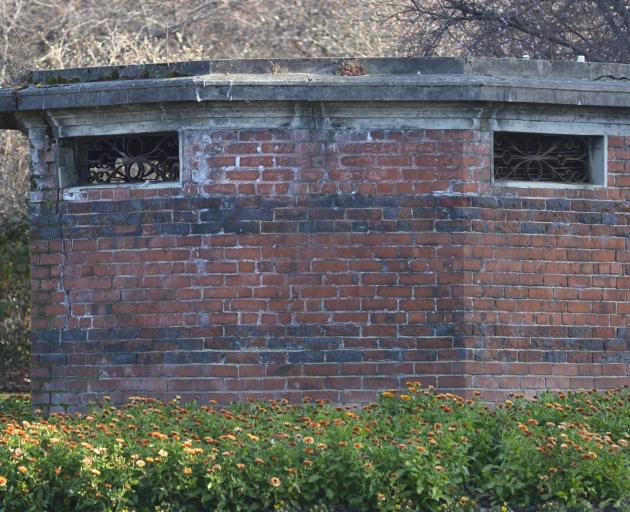 The toilet block in Manor Pl, in Dunedin. Photo: Gerard O'Brien
A toilet block believed to be one of the oldest in New Zealand is of high heritage significance and should be retained and repaired, a report says.

The Manor Pl standing toilet block was originally built in 1912 but was bricked closed in the late 1970s.

Dunedin City Council recreation planning and facilities manager Jendi Paterson said a heritage assessment report was initiated last year as part of a stocktake of the council's assets and their condition.

The report was recently completed and concluded the toilet block was of ''high heritage significance''.

The report recommended it be retained and repaired in a conservative manner, Ms Paterson said.

''Before considering any repairs, we need to undertake a condition survey of the structure and seek further structural conservation advice.''

Council archivist Alison Breese envisioned restoring the toilet block and possibly placing information panels on it to highlight the historical significance of the toilets.

There were several historical toilets in Dunedin, but the Manor Pl was possibly the oldest ''standing toilet'' block in the country.

It stood out as it had a classic octagonal layout, while other newer blocks in the city were square and a bit ''boring''.

The information panels could also feature information about the former underground toilets in the Octagon which were closed and filled in with rubble.

Ms Paterson said restoration might involve the removal of bricked-up doorways and a clear panel over the internal entry, restoration of the interior, landscaping and possibly feature lighting as well as structural repair.

The restoration work she described was estimated to cost between $12,000 and $15,000, although this excluded any structural repairs and future interior works.