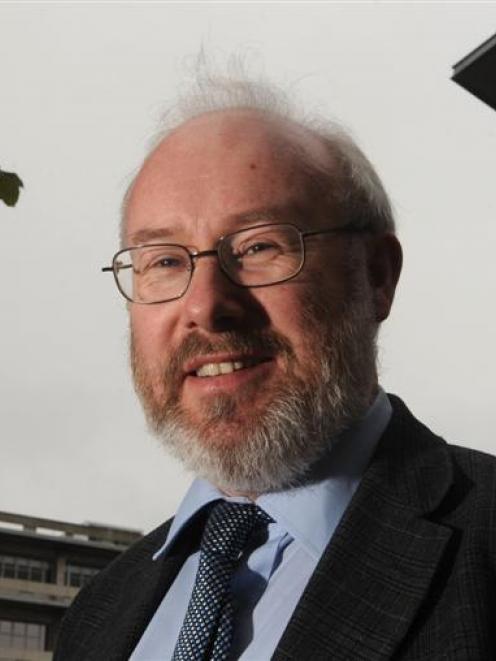 Scottish history specialist Prof Dauvit Broun at the University of Otago, during his first visit to New Zealand. Photo by Peter McIntosh.
For Dauvit Broun, there is nothing like touching and reading a medieval document up to 1300 years old, or reading a later reprint of something first produced that long ago.

Books, letters, charters and business papers enabled him to see beyond historical facts and connect to the past, the University of Glasgow history professor said yesterday.

"It is fantastic - awesome... When you are touching something like that, you are actually in contact with people from the past in a very direct way."

History had to be interpreted to mean something, he said.

"[Words] give you that contact with human beings - real people - and that's what's history is ultimately all about.

"Touching and reading manuscripts gives you a buzz that everyone can understand."

Prof Broun is on his first visit to New Zealand. He is one of about 230 historians, literary academics and linguists attending the Australian and New Zealand Association for Medieval and Early Modern Studies conference being held this week at the University of Otago.

Next week, he will be hosted by the university's Centre for Irish and Scottish Studies.

Prof Broun's real name is David Brown. He uses the Gaelic version to reinforce his family links and personal interest in Scotland's Gaelic past.

The oldest known Scottish manuscripts were a biography and another book about St Columba, the monk exiled from Ireland to the island of Iona in AD563. Both dated from about AD710, he said.

"Business literacy" - papers and letters and the like - first appeared in Scotland among the elite in the 12th and 13th century and was widely embraced by most people with property and possessions within 100 years, Prof Broun said. Everything was written in Latin.

The oldest letter he had seen was an instruction from King Alexander I of Scotland to the prior of Durham, dating from about 1115.

"It is tiny thing. It says something like: 'Don't take a certain dispute over land forwards until I get down to see you. And also there is something else I want to talk to you about.' But he doesn't say what the something else is.

"It is very frustrating."

Perhaps Prof Broun will one day discover the "something else"; until then, he will keep searching.

• Prof Broun will give a public lecture on a new approach to the origins of medieval Scotland on Monday, in the Burns 5 lecture theatre, at 5.15pm.