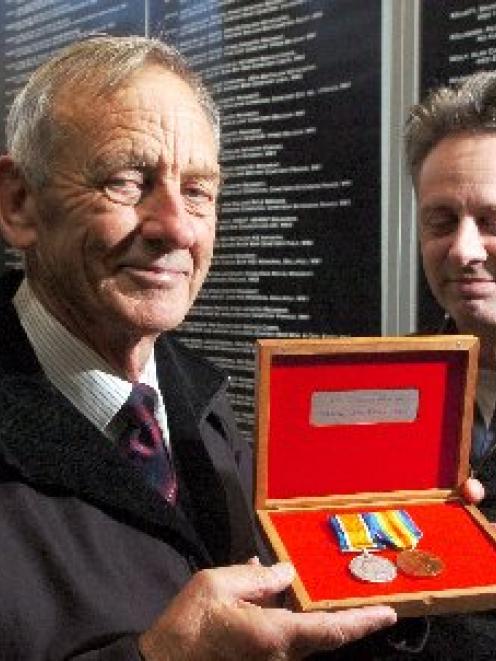 Flanked by a roll of honour commemorating Dunedin people who have died in war, David Braithwaite (left), a former mayor of Hamilton, and son Mark Braithwaite, reflect on service medals for their relative Jack Braithwaite, formerly of Dunedin. He was...
A military scandal involving the execution of a former Dunedin soldier during World War 1 will be followed by a happier homecoming today, on Anzac Day.

John ("Jack") Braithwaite was born in Dunedin in 1885, one of at least 16 children of bookseller Joseph Braithwaite, who was mayor of Dunedin in 1905.

Having volunteered for the New Zealand Expeditionary Force in May 1915, Jack Braithwaite served in Egypt and was later sent to France in April 1916, where he did not conduct himself well.

He went absent without leave, served at the front for a short time, and was later imprisoned after again leaving his unit, receiving further terms in military prison after seeking to

escape, as the Dictionary of New Zealand Biography notes.

His attempt to defuse an incident involving a group of Australian and New Zealand prisoners and a military policeman at a military prison resulted in his being charged with mutiny.

British military leader General Sir Douglas Haig confirmed the court-martial sentence, and he was subsequently executed in Rouen in 1916.

Three Australian prisoners were also charged with mutiny arising from the incident, but their death sentences were commuted to two years' hard labour because the Australian Government had prohibited executions without its approval.

Because of the efforts of many concerned people, including historians and politicians, particularly former Invercargill MP Mark Peck, Mr Braithwaite and four other New Zealand servicemen who were executed during World War 1 were pardoned by the New Zealand Parliament in September 2000.

Research has shown the five would have been eligible for decoration and Mr Braithwaite's family were subsequently given the British War Medal, Victory Medal and the New Zealand Certificate of Honour, acknowledging his war service.

His nephew, David Braithwaite, a former mayor of Hamilton, has returned to Dunedin this week and at a ceremony at 8.30am today will hand over the service medals and certificate to the Otago Settlers Museum.

After the execution, most members of the large Dunedin Braithwaite family left Dunedin, setting up new homes in the North Island, Britain and Australia.

David Braithwaite's father, Roderick Braithwaite, shifted to Auckland and later to Hamilton, where he became mayor.

He never mentioned his brother to his children.

The scandal of having a relative executed for mutiny had a "devastating" effect on the family, with Joseph Braithwaite dying, heart-broken, in early 1917, a few months after his son.

David Braithwaite said the wheel had come full circle with his return to Dunedin to bring his uncle's medals.