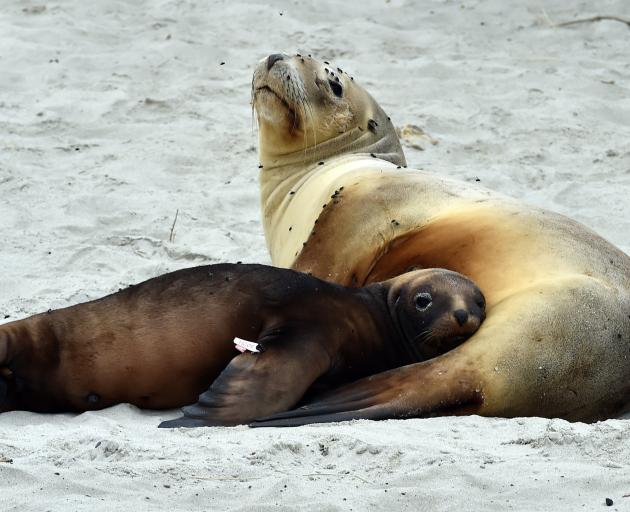 Pebble nurses her pup at the entrance to Tomahawk Beach last month. PHOTO: GREGOR RICHARDSON
The New Zealand sea lion pup at the centre of a stoush surrounding sand excavation at a Dunedin beach is believed to have surfaced at a sea lion nursery nearby.

It was photographed by a trust volunteer on March 2, and confirmed as the missing pup yesterday, Miss Whyte said.

When a Dunedin construction firm excavated sand from Tomahawk Beach last week, during the animals’ breeding season, it angered locals who had regularly checked in on two of the threatened sea lions that were raising pups on the beach.

The work was said to have separated one pup from its mother. The adult sea lion left the beach while the digger was working.

Miss Whyte identified the two breeding adult sea lions that were at Tomahawk Beach as Hiriwa and Pebble.

Both sea lions had now left the area, she said.

At this stage of the breeding season sea lions typically formed larger creches and there were now two sea lion creches of five pups each in the Dunedin area.

From now, sea lion mothers in the Otago Peninsula area were expected to creche their pups together across two or three sites until mid to late autumn, she said.

Hiriwa was seen at a different site with her pup before the work at the beach began, and Pebble and her pup were unaccounted for until yesterday.

A record 17 pups were known to have been born between Taieri Mouth and Warrington this year, including one that was presumed dead in the wild, and one that was stillborn, she said.

There were also three pups known in the Catlins.

The company doing the work at Tomahawk Beach, Nash & Ross, said it was working to its consent conditions.

The Otago Regional Council initially said consent conditions had been adhered to, but later said the matter was under investigation.

And while the regional council had noted its consent for the work did not include wildlife, Mr Pope said the council needed to reconsider the matter.

"They need to always be constantly reassessing their consents around the coastline," he said.

"Biodiversity is always a changing area."