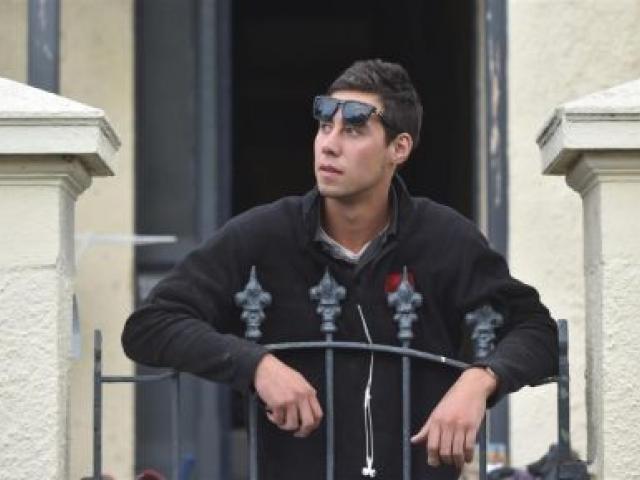 Hyde St resident Reuben Sandoy (20) looks up at a CCTV camera which the University of Otago has pointed at the notorious party street. Photo by Peter McIntosh.
Surveillance cameras could be dotted around the North Dunedin student area to prevent disorder if a University of Otago plan is adopted.

Deputy proctor Andy Ferguson said yesterday the university hoped the Dunedin City Council and police would agree to a proposal to put up cameras in campus streets to deter dangerous and antisocial behaviour, such as lighting fires.

This comes after the university installed a camera on one of its buildings last month and pointed it down Hyde St - notorious for the Hyde St keg party - in a move it says has resulted in instances of fire lighting being well down on previous years.

However, students in Hyde St told the Otago Daily Times having a camera pointed at them was unsettling, with one, who did not want to be named, annoyed residents were not informed it had been installed.

"It's like having your mum and dad on the street watching you,'' she said.

Others said the camera had not stopped residents from being robbed. Mr Ferguson said fires lit during O Week showed there was a "strong need for this type of safety measure here''.

"The purpose is to keep our students and local community safe and prevent behaviour, particularly from non-students attracted to the area, that causes harm to others.''

"If there were no fires, then we might not need to do this.

"But there have been, and we have a duty of care to protect people living here.''

It was hoped installing more cameras around the campus area, predominantly on the flat, would act as a deterrent for both non-students - who police statistics showed were responsible for most of the disorderly behaviour - and students.

The Hyde St camera was one of about 400 cameras operated by the university, most of which monitored the inside of buildings, while about 18 focused outwards on public streets or campus walkways.

Because the Hyde St camera was filming in a public place, students were not required to be notified it had been installed.

University of Otago Faculty of Law Prof Paul Roth said there was nothing illegal about the university installing cameras.

As long CCTV or any sort of monitoring was focusing on public areas and not inside private addresses it was "fine'', Prof Roth said.

CCTV cameras were "all over the place'' and privacy had to be balanced against other values, including public safety.

"If the campus area is turned into a police state, you have got to ask, why is that?''

Cr Lee Vandervis, who has long been calling for more video surveillance to prevent disorder in the North End, was "delighted'' at the steps the university was taking.

The best way to reduce disorder and vandalism in the North End was to prosecute the culprits and capturing CCTV footage was "really the only way'' of getting the necessary evidence to make prosecutions, Cr Vandervis said.

He did not believe installing cameras was an invasion of privacy.

"If people want to do private things they can do it in the privacy of their own homes.

"But if they are going to burn couches in the street, I hope there will be as many cameras there as possible to make sure they get prosecuted for it.''

Hyde St resident Reuben Sandoy (20), an apprentice plumber and gas fitter, said it was unsettling always being "watched'' by the camera which was not far from his flat.

"Anyone that comes in, they are going to be getting watched.

Otago University Students' Association president Laura Harris said she would consult students on the issue, but in a statement last night did not come out strongly against surveillance.

"I do find the premise of implementing surveillance, to monitor a subset of society based on a mainstream perception of them, concerning.

"However, there has been a lot of trouble in student areas perpetrated by non-students which has forced this reaction.''