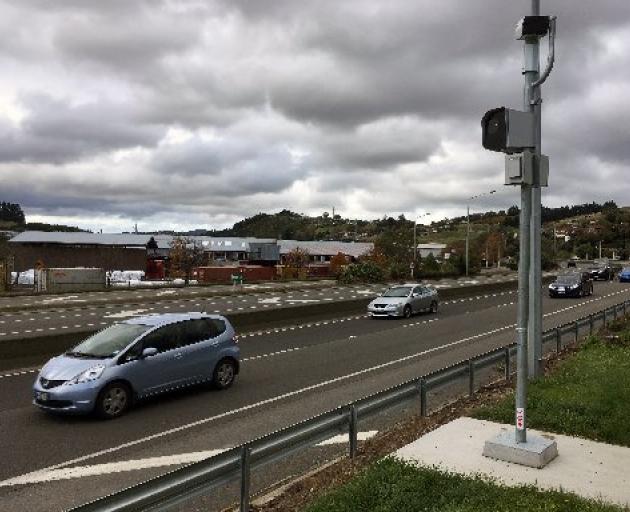 The three fixed speed cameras in Dunedin are snapping more motorists than ever — a trend contrary to a prediction by a top police officer.

The cameras — on the Southern Motorway, at Burnside; in Maclaggan St, in central Dunedin; and King Edward St, in Kensington — were switched on in March last year.

An Official Information Act request to police from The Star last year revealed nearly 3000 tickets were issued from the three sites in the first month of operation.

More than half of the infringements were from the site on the Southern Motorway.

In an interview with The Star in April last year, national road policing manager Superintendent Steve Greally, of Wellington, said new cameras usually had a ‘‘spike’’ in the number of speeding tickets issued after going live.

The spike was due to motorists being unaware a camera was there, he said.

After the motorists were ticketed, they ‘‘moderated their behaviour’’ and drove more slowly past the cameras, resulting in fewer tickets being issued ‘‘over time’’, he said.

However, police driver offence data reveals more tickets were issued from each of the three sites in December last year than in any previous month of operation.

The motorway site, which tickets speeding motorists travelling in both directions, snapped about 40% more motorists in December last year than it did in its first month of operation.

The King Edward St site caught 121% more motorists in December than in March.

The Maclaggan St site ticketed 12% more motorists in December than it did in its first month of operation.

The fines issued from the three sites for the nine months to the end of December last year totalled nearly $1.29 million.

Spt Greally declined a request for an interview about the December spike but the police media team issued a statement to The Star.

Offence figures tended to increase in December and January because a lower speed enforcement threshold was in place, the statement said.

Between 0.2% and 0.3% of motorists driving past a static speed camera were issued a ticket, the statement said.

‘‘If you receive a safe speed camera notice you are in the minority, and allow it to serve as a reminder to be safe on the roads — a much less costly reminder than the aftermath of a tragic crash.’’

Many like me over the years have tried to help police with ‘driver death reduction’. There have been reports lately of former traffic cops saying what they think and again it shows the police marching down the wrong road.
I was an advanced driving instructor doing assessments (when they were part of the licensing system) and as part of H&S workplace training. I even assessed police drivers. Now all the drivers came to me were mostly experienced & professional drivers. They were all driving more careful than normal, slower than normal, wearing seat belts and sober.
Most had “crash potentials” nothing to do with what the police are targeting. Nothing is being done about those bad driving techniques that are killing out there. We need a system in place that tests drivers and ensues their road code knowledge is current. We need more cops on the road to catch bad driving not cameras catching good drivers just over the limit going down a hill.
I had a car do a sudden U turn in front of me whilst that driver on her cell phone. I damaged my car going over a bollard to avoid her. Nothing got done except the fingers that driver gave me. That driver will carry on and kill.