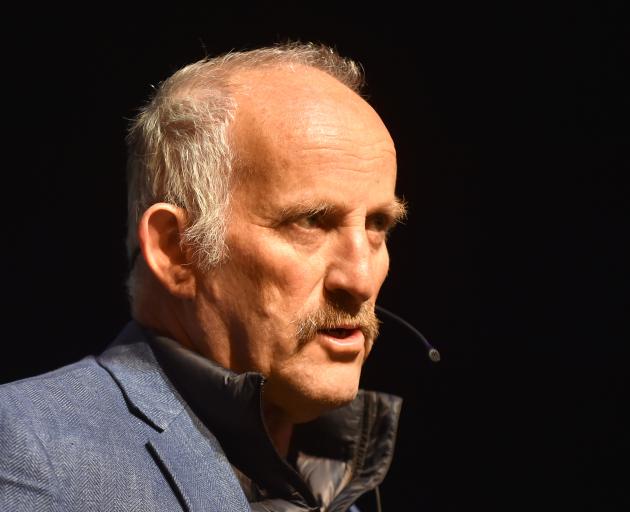 Gareth Morgan speaks at the Mayfair Theatre in Dunedin last night. Photo: Peter McIntosh
Mainstream political parties who underestimate Gareth Morgan's influence in the September 23 election will do so at their peril.

Mr Morgan, the leader and founder of The Opportunities Party (Top) attracted about 200 people to hear him in South Dunedin's Mayfair Theatre last night, apparently because it was the only venue available for him to hire.

Complaining about the cold of the theatre, Mr Morgan assured people they would soon warm up, and they did.

For 40 minutes, Mr Morgan enthralled the audience, fielding applause and laughter as he outlined only one policy - although it was a very wide-ranging and quite detailed policy -before taking questions.

''I promised I would only talk about one policy tonight, otherwise I would have you all in a coma,'' he said to much laughter.

When the economist-turned-investor and now politician formed his party, much was made about his style of delivery, which was described as dry and casual.

Although he was dressed casually, often with his hands in his pockets, those attending last night paid close attention to what he was saying. The attendance was about a third that size when he was last in Dunedin.

Mr Morgan's delivery was slick, peppered with colourful language. He said his job was to offend everyone and often mentioning his party's policies would go down like a ''cup of cold sick''.

Even a microphone failure signalled it was time for a joke, and it allowed Mr Morgan to really get into his stride.

The party is seeking $3billion to put in place preventive policies to stop things such as youth suicide, stress on families causing child abuse, bullying at schools and in the workplace.

And Top wants to provide an unconditional basic income for everyone who needs it.

To do that, he is going to cut superannuation for the wealthy and install an asset tax on all assets, including houses.

''I hope you are happy with that,'' he told the elderly in the audience. ''You should see their faces when I talk about this at retirement villages. I expect them to fall off their walkers.''

However, the people the elderly cared about the most were their grandchildren, Mr Morgan said.

They wanted them to succeed and get good jobs and a house and they were prepared to listen.

Mr Morgan and his wife Jo become eligible for the pension next year, something he finds offensive to contemplate.

He proposed cutting the pension for the well off to $10,000 down from $20,000 each for married people and increasing it for the less well off, something which was applauded loudly.

Mr Morgan answered questions on compulsory voting, something he favours, the effects of drugs on problems like suicide and mental illness and also queries on the economy.

The audience ranged from those in their 20's through to retirees. Those spoken to by the Otago Daily Times said Mr Morgan had good ideas and was talking sense, something other political parties might be wise to take note of, three months out from the election.

Mr Morgan plans to be in Dunedin once more before the election.

He speaks in Timaru tonight.

Sound interesting but for this election this is likely to split liberal votes and get National back in.