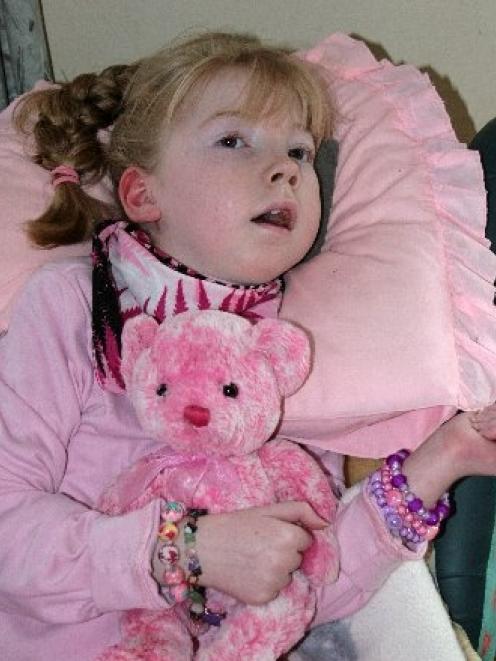 Olivia McLay (9) smiles for the camera. She has a incurable genetic disease and needs some friends to make her short life better. Photo by Dan Hutchinson
Olivia McLay is 9, she is dying and she wants to be visited by some friends.

From the age of 5, quality of life has quickly deteriorated for the Mosgiel girl as a result of a rare genetic disease, metachromatic leukodystrophy.

"It is killing her brain and eventually she will pass away," her mother, Donna McLay, said.

Olivia went to Elmwood School until she was 6, but as she got sicker she went less often.

She was withdrawn from the school by Mrs McLay and husband Mark at the end of last year.

Olivia had been spending 45 minutes at the school three times a week, depending on how well she was. While there, she was under the care of a nurse paid for by the Ministry of Education.

She cannot take part in activities, has very limited movement, little vision and no speech.

But she can hear what is going on around her - and has her own chuckle.

"Hearing them [visiting children] running around and being normal kids would make her laugh," Mrs McLay said when visited by The Star.

Mrs McLay said she felt she had little choice but to withdraw Olivia from school.

Other children needed a letter signed by their parents saying they could visit her on days she was at school, and there were limits on what classes she could attend.

"They [the school] were scared she was going to pass away having a seizure at school and asked us to, more or less, not come back, which I was a bit upset about."

School principal Jenny McDonald said the school had gone much further than most to cater for Olivia, but her care was more than it was able to cope with.

Some of the younger children were getting distressed around Olivia, particularly when she was on oxygen, and that was why they needed permission from their parents, she said.

When she left school, the children put together a "photo memories" montage of Olivia's time there.

Mrs McLay said now that Olivia did not have the school contact, it was very "isolating" when they were alone.

Olivia has two older sisters and their friends sometimes come to visit, as do a few good family friends. Other family friends have stopped coming around because "they don't know how to talk about it".

Mrs McLay said she contacted The Star because she did not know what else to do.

"Our wee girl isn't contagious and we just want people to come and see her at home and just to visit and just to make them aware that we are still here."

She said it could be as simple as reading a book to Olivia, or even just hearing a group of children talking would make her happy.