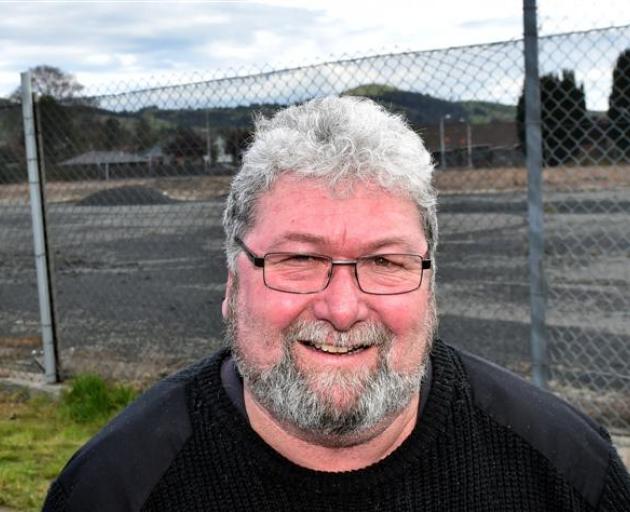 Mosgiel Taieri Community Board member Martin Dillon at the site where the new supermarket will be built. Photo by Peter McIntosh

Mosgiel will have its giant new Countdown supermarket up and running within three years, after Progressive Enterprises was granted consent for the Gordon Rd outlet yesterday.

The consent came with conditions, including no other retail stores being allowed, but a Progressive spokesman said last night the decision was ''a very significant milestone'' and Mosgiel residents could have ''a very high degree of confidence'' the store would open as planned.

That opening date would be no later than October 2018. Mosgiel's present Countdown supermarket is on land owned by competitor Foodstuffs, and its lease is due to expire in October 2018.

Progressive believes that lease will not be renewed, hence the need for a new site. As part of the consent, Countdown must close its existing Mosgiel supermarket before the new store opens.

The new store, which will be more than 50% larger than the present Mosgiel Countdown, will be open from 8am to 9pm daily.

To be built on the former St Mary's School site, it will have 174 car parking spaces and 7.5m-deep landscaping on the Gordon Rd frontage.

Two protected yew trees on the site will be retained, low-tone beeping technology will be fitted to forklifts, all of which will be electric-powered quieter models.

The consent also stipulates no retail tenancies, other than a ''coffee dispensary'', will be permitted on the site, and ''for the avoidance of doubt'' the consent expressly states that cafes and pharmacies will be excluded from operating on the site.

Progressive had wanted permission to include small retail spaces within its building envelope.

Other consent conditions include limiting heavy vehicle usage to Gordon Rd, installing noise-reducing glazing to nearby residential properties, and ensuring pylon signage is no larger than 6m high and 2.2m wide.

Supermarket staff will not be allowed to park their cars on surrounding streets. Eight staff parking spaces will be provided on the site. Also, the customer car park will be locked during non-trading hours.

A covered cycle stand will be included in the build, as will a covered ''and suitably lit'' walkway along the site's northwest boundary.

Construction headaches will be mitigated by ensuring road frontage landscaping is installed when construction begins, limiting construction activity to Monday to Saturday from 8am to 6pm, and having a ''point of contact'' for residents with concerns or queries.

Mosgiel Taieri Community Board member and real estate agent Martin Dillon said the consent was ''a brilliant result. Now we can get on with it''.

Mr Dillon said he would have preferred to have seen the council ''roll out the red carpet'' more than they did, but ''it's done, and that's great''.

The consent was more than a guarantee of a new supermarket for Mosgiel, it was also a signal to other major retailers that the town was open for business.

It showed there was ''confidence'' in Mosgiel as a site for development, with a ''national organisation'' choosing to invest there. He hoped that would lead to other chains ''sitting up and saying, 'Well, we should be in Mosgiel too'''.

• Supermarket only - no other retail allowed