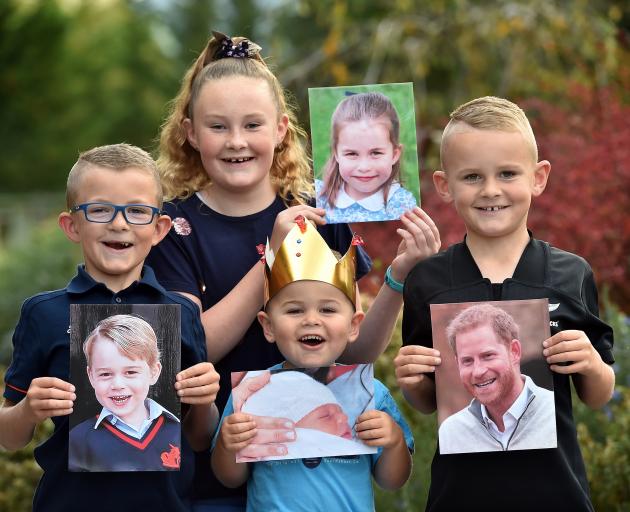 Putting on their best royal poses are (from left) George, Charlotte, Archie and Harry Stafford, holding photos of their namesakes. PHOTO: PETER MCINTOSH
The Stafford children never thought of themselves as being regal.

However, Charlotte (11), Harry (9), George (7) and Archie (4) are starting to think they must be, because it has become clear that even members of the Royal Family are naming their children after them.

When Prince Harry and his wife Meghan, the Duchess of Sussex, announced yesterday their newborn son's name was Archie, no-one was more surprised than Mosgiel parents Jack and Jo Stafford.

They now have children named after Prince Harry, his newborn son, and two of Prince William's children.

"It's a royal flush - what are the chances?"

Mrs Stafford said they had not intended to give their children royal names.

"It was just a fluke. We've always just really loved those names.

"First, Prince George came along, then Princess Charlotte - which we thought was just a coincidence. But now Archie ...

"Once again, like when all the other recent Royal babies were named, the first thing I woke up to was the dinging of my phone, with messages from friends who have all heard the news before me.

"We've had a lot of laughs over this."

She said Archie was very excited he had the same name as a British prince, and to celebrate, he built himself a crown at Montessori yesterday.

Asked if they planned to have another baby, Mrs Stafford said no.

But if they did, she would name the child Lucy or Freddie.

Based on their luck so far, the chances were very high the name would be that of the next Royal baby, she joked.

You heard it here first, folks.