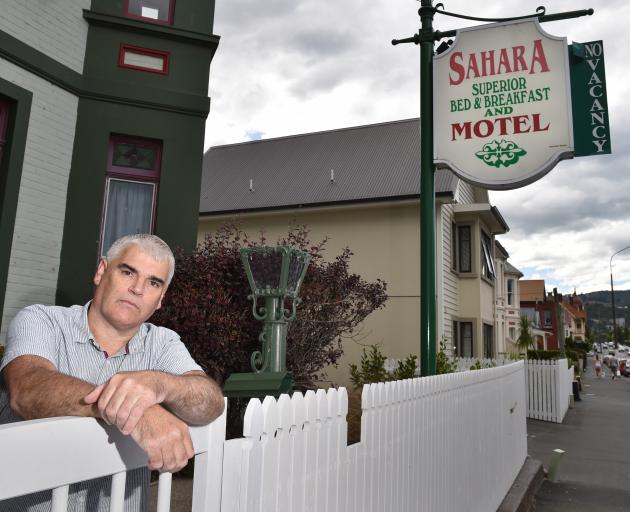 Sahara Motel manager Paul Ryder has had enough of rowdy student parties near his business. PHOTO: GREGOR RICHARDSON
"Out of control" student parties are causing motel guests to check out early and leave the city in droves, a frustrated Dunedin motelier says.

While police have praised behaviour in the student area in recent days, Sahara Motel manager Paul Ryder said this year was the worst he had experienced in terms of noisy, messy student parties.

His George St motel is next door to Union St West, which is home to several flats.

"We’ve had consistent problems over the past three or four weeks," Mr Ryder said.

"Last night [Thursday night] there were over 300 students piling out on to the street, broken glass, at about 1.30am."

That was causing guests to check out early and leave Dunedin, he said.

About 60% of his guests were in the city for health reasons, such as undergoing chemotherapy or having a child in Dunedin Hospital.

"They need their sleep."

He wanted students to be considerate of the community, and take responsibility for themselves.

"Students bring a lot of vibe, colour and fun to the town and it’s a shame a small bunch let the majority down."

In an emailed response, environmental health and alcohol licensing team leader Carlo Bell said the council, and noise control, had attended "a number of callouts, issued warnings and seized equipment in Union St over the last few days".

"The parties are migrating from flat to flat and also out on to the street," she wrote.

"Also with the sheer number of people involved, it is at times unsafe for the officers."

A police spokeswoman said police were notified at 11.13pm of a large party on Union St West.

"He wanted students to be considerate of the community, and take responsibility for themselves."

Good luck with that one mate...

I don't think there is a more self-centred section of our community than the Uni students.

Hmmm. I was a student 3 or 4 years ago, and caused my fair share of noise at house parties in that area. A big part of the problem is that almost all of the old student area pubs have been bought by the Uni, then closed. Unless you want to hike to the Octagon there's not much to choose from. It is easier to buy a crate of beer, turn the stereo up, have a good time. The students of today are no more noisy or self centred than past generations. Student drinking is nothing new. The absence of public student watering-holes is. In its one eyed quest to purify the student culture, the Uni has been slapped in the face by the law of unintended consequences. Everyone is the worse for it

Including the poor Botanic Garden staff and visitors. Where do you students get off?

. Very well put and 100 % correct, Where is Cull and the current Council members now to stand up and face the music, those with common sense knew this would happen, but again it fell on deaf ears (can I say that now days) Cull and the such like swept it under the carpet, Hawkins was on Council then, they have a lot to answer for yet they will not be held accountable, Like seagulls really Crap on people then bugger off. It is time these clowns are held accountable,

The university condones / encourages student drunkenness and antisocial behaviour as the norm ‘kids will be kids’ then on the other side looks at how we can solve all the social problems these values cause.

Increase the drinking age back to 21, and make the penalties for supplying alcohol to underage people more severe.
Then the Universities can kick out any underage student is is caught with alcohol on them or in their system.
It's not rocket science and the people it will upset need to be upset.