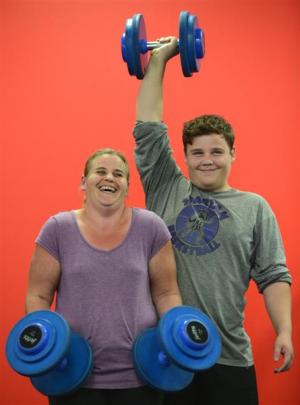 Mother and son powerlifters Shelley and Sean Kennedy train at Jetts gym in Dunedin this week. Photo by Peter McIntosh.

Moving the coffee table should not be a problem for mother and son powerlifters Shelley and Sean Kennedy.

The pair have been training intensively at Jetts gym in Dunedin since early February in preparation for the Otago powerlifting championships today.

Personal trainer Chris McIntee said he had noticed a huge improvement in the amateur pair's progress in the last few weeks.

''I've seen massive changes, and I guess it helps them both, in and out of the gym.

''It's a good test and rewarding for them to see their results go up and up each week.''

Mrs Kennedy (37) said she had been training for almost a year with the aim of ''just proving I can do it''.

Sean (17) had been training for about six months.

He said the evenings of fatigue after training were hard at first, but now he was enjoying the challenge, training up to five times a week.

The Otago Powerlifting Championships will involve a dead lift, bench press and squat. All three lifts being added together and measured against the contestants' weight.

Mrs Kennedy is competing in the women's open division and Sean in the under-21 division.

They have no particular weight goals in mind and just want to ''give it their best''.