The AgResearch facility at Invermay. PHOTO: STEPHEN JAQUIERY
A Dunedin MP is calling on AgResearch to finally abandon plans to shift top scientists from Invermay. 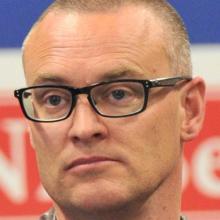 David Clark
But AgResearch insisted "natural turnover" - rather than staff concerns about any move to Lincoln - was behind 35 of the departures.

Unless he could be convinced otherwise, Dr Clark said the plan's insistence on relocating dozens of top scientists and support staff from Dunedin to Lincoln should be shelved.

"And as yet I have seen no evidence to suggest that would be a good idea."

The comments by Dr Clark - speaking in his capacity as a Dunedin North MP - came days after AgResearch scrapped plans for a joint Lincoln campus set to cost $206million.

The research facility was to be built in partnership with Lincoln University, but AgResearch would instead investigate building its own facility at the campus.

The change came after the Government in December rejected a third business case seeking $85million in government funding for the joint facility.

The moves prompted Dr Jock Allison, the former head of Invermay, to label the plan a waste of money and a "disaster".

Yesterday, he also accused AgResearch of being "creative" with figures showing the number of jobs affected.

When the Future Footprint plan was first unveiled in 2013, it was estimated 85 science and support jobs would be moved from Invermay to new campuses in Palmerston North and Lincoln.

Consultation later led to that number dropping slightly, while expectations staff would not move before 2016 were pushed out as late as 2019.

But, when asked by the ODT last month, an AgResearch spokesman had said three staff had already moved to Lincoln, six more had been made redundant and three had resigned.

Another 35 staff were still to relocate, AgResearch said.

Dr Allison challenged the figures yesterday, saying 25 staff had already left and another "35 to 40" would, rather than move to Lincoln.

Asked to respond, the AgResearch spokesman confirmed 44 staff had left the organisation, but only three had cited the Future Footprint plan "as the reason why they left", while six others left after an FFP-related restructure.

"Natural turnover accounts for the balance," he said.

Dr Clark said the threat to staff retention had been well signalled in the past, and had now been realised.

Staff surveys had shown most Invermay staff did not want to move, and would take up other options rather than do so, "and in many cases, unfortunately, that's already happened".

"Those risks were real and either they haven't been well managed, or they never could be well managed.

"When a staff says it wants to stay, it does," Dr Clark said.

AgResearch chief executive Tom Richardson would not answer specific questions about any rethink of its plans for Invermay, but said collaboration remained "the key to great science".

Staff at the Invermay campus would "continue to make an important contribution to solving New Zealand's big issues", and AgResearch would "continually review how best to keep pace with rapid changes in research".

He was not against the entire Future Footprint plan, but it made no sense to move Invermay scientists and support staff away from a "huge proportion" of New Zealand's sheep industry.

Invermay was already part of a successful Dunedin cluster, also including the University of Otago and private sector parties, "so why on Earth would you tear apart that successful model?"

A spokeswoman for Dr Woods said she had "spoken to Dr Clark and listened to what he's said", but the next "decision point" would be when AgResearch submitted a new business case for its revised plans at Lincoln.