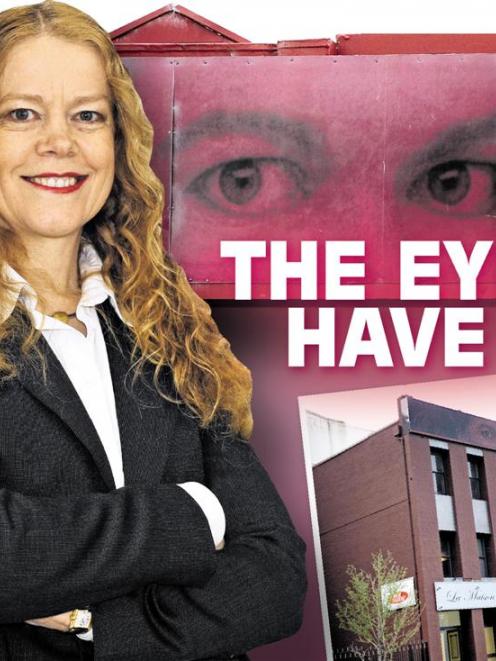 The Dunedin-based list MP caused a stir when she entered Parliament late last year, after admitting she owned the Queens Gardens building, which houses the massage parlour La Maison.

Asked if her eyes featured on the sign at the top of the building, she replied, "You can go and have a look and make your own mind up about that".

Pushed for more details, she confirmed: "It is my eyes on top of the building."

Ms Calvert said the reason her image was used was she "didn't want anyone who was a stranger, who would sue you for using their image".

"Your own image belongs to you, and the only person whose image safely belongs to me is mine."

She decided to "do up" the facade of the historic building and install the sign after a change of massage parlour ownership.

"It is just a banner of sorts above the top, because it was a ratty building when it was redone."

Before the change, the building used to display the word "massage" minus several letters.

She could not recall whose idea the sign was, but "people know ... It is not a secret of any description".

"If you asked anyone who was a friend, they would tell you they were mine."

She often looked at the building when she drove past, but never the sign, she said.

Ms Calvert said she told people when she entered Parliament that she owned the building.

She said her tenant was a legal business, but when asked if it was a good look for a parliamentarian to be used in the advertising of a massage parlour, she replied: "I am not the morals of the community."

"I am not advertising them. You wouldn't even know it was me [unless] you were told. It is not a picture of Hilary in any useful sense."

Ms Calvert said she almost did not enter Parliament because of the "whole pecuniary interest thing".

After Parliament last week released the 2011 register of pecuniary interests of MPs, Ms Calvert attracted media coverage for her interest in 23 properties and 28 companies.

"Who do we want running the country - people who can't even balance their own books?

"For some bizarre reason, some people think that owning stuff is embarrassing."