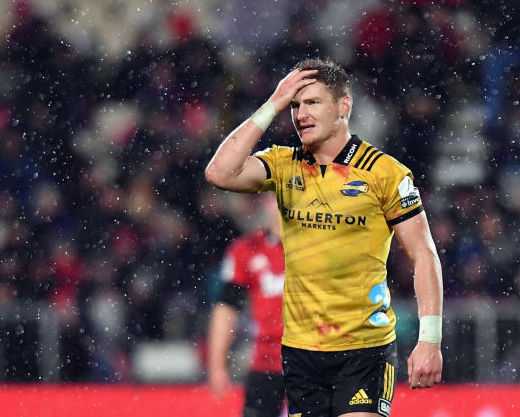 Jordie Barrett. Photo: Getty
Police were called after All Blacks star Jordie Barrett ended up in a stranger's house in Dunedin early yesterday after a night out.

The 21-year-old brother of Beauden Barrett was discovered by two women in a student flat about 5am.

Police and Otago University security were called to a property on Howe St when Barrett and friend Sam Casey were disturbed by the two women, who demanded they leave.

It is understood the utility back had been at a post-match function after his Hurricanes team lost to the Highlanders on Friday night, 30-14.

On the way home he and Casey decided to visit friends in the Castle St area of the city.

But Casey told the Herald on Sunday the pair unwittingly entered the wrong house. Casey (22) said it was a case of "a couple of muppets making a stupid error after a few beers".

The pair had stopped for McDonald's and were eating in the living room when two women came out of their bedrooms, Casey said.

"We never intended to do anything wrong. The door was unlocked and we thought it was our mate's place, which it turns out is over the road."

Casey said they apologised and left as soon as they were challenged by the tenants.

"They were pretty upset and rightly so."

Barrett, who made his test debut against Samoa last year, is due to join his All Black teammates in Auckland today to prepare for the first of three tests against the touring French.

All Blacks management confirmed it was aware of the incident and was investigating.

A Hurricanes spokesman last night said it was an innocent mistake and Barrett and Casey apologised and left.

"They were not intoxicated and after questioning by police were released."

Police confirmed they were called to an address in the area about 5.10am yesterday after two men gained access to a house through an unlocked door.

Tenants called police and campus security kept an eye on the men until police arrived.

No charges were laid.

Casey wanted to apologise for wasting police time and to the girls for "giving them a bit of a fright".

Rugby has been plagued by unsavoury incidents in the past few years. Although this is likely to be considered at the minor end of the scale, it will be a fresh headache for management that has been striving to display a new face for the national game.

In October last year, NZR announced the findings of an extensive review into the culture of rugby in the country, following several incidents involving alcohol abuse and the mistreatment of women.

The Respect and Responsibility Review was commissioned after the ill treatment of a stripper hired for a Chiefs end-of-season party in 2016, and All Black Aaron Smith's airport toilet sex incident the same year.

The review identified no less than 36 cases of misconduct.

The All Blacks face France at Eden Park on Saturday night. Barrett is in the squad, along with brothers Beauden and Scott.

Barrett's blunder has some parallels to an incident involving former All Black hooker Norm Hewitt, who drunkenly broke into the wrong Queenstown hotel room in 1999. At a press conference organised to apologise for his actions, Hewitt broke down in tears.

Pretty typical, rugby is able to get away with most things. This included. If we did this we would be locked up no matter if we spun the same yarn.

Nah. This kind of mistaken flat number thing happens on campus lots. Not a biggie.

Perhaps someone should mention to the girls that if their door was locked, as it should be this wouldnt have happened.

Not entirely the guys fault as the correct house was across the road apparently.

Fairly easy mistake to make in a strange place

Nothing sinister here..lessons for both parties.....BUT...I object to the reporters' closing statement "Barrett's blunder has some parallels to an incident involving former All Black hooker Norm Hewitt". Hewitt had a self admitted chronic binge drinking problem and kicked the glass door of a unit in, cutting himself badly in the process and had no recollection of the incident.