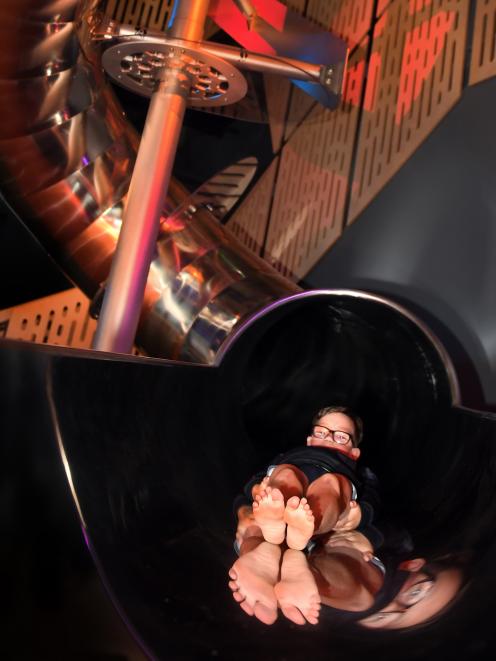 When the Tuhura Otago Community Trust Science Centre opens to the public at 10am today, visitors young and old are likely to find themselves drawn to the slide, illuminated on the outside by a range of fluorescent colours.

Abbotsford Primary School pupil Nieko Scoles yesterday enjoyed his ''coolest birthday ever'' when he was able to celebrate the occasion with a special preview visit.

He greatly enjoyed the slide and being invited to ''sneak into the new science centre and do cool stuff before it even opens''.

The slide was funded by $100,000 from the Lion Foundation and was created by the team at Total Sheetmetals in Palmerston North, using Rolf Veldboom, of Novare Design, as structural engineer.

Museum organisers said a multitude of stairs were encountered on the daring climb to the top of the slide, and the journey down had been described by adults and children alike as ''intense'', ''so much fun'' and ''seriously epic''.

Museum director Dr Ian Griffin said it was '' a ride that you'll need to take more than once''.

The redevelopment includes more than 45 interactives, most of them manufactured in Germany, including a mood ball, which explores colour psychology, and a ''virtual body table'', which is a large 3-D touchscreen enabling visitors to learn more about the usually hidden secrets of the human body.

The redeveloped centre had taken a ''unique bicultural approach'' to explain the natural world and its forces, he said.

And a Ngai Tahu cosmogenic whakapapa, or creation story-provided by Ngai Tahu historian Tahu Potiki- was woven through the centre, enabling the natural world to be explained from two different knowledge bases, Dr Griffin said.