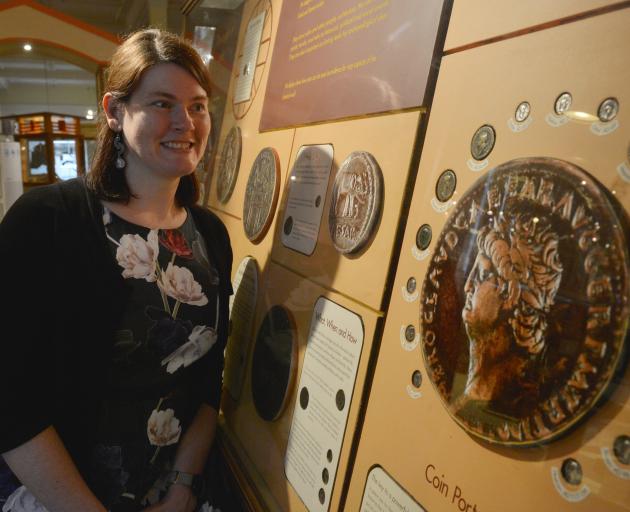 University of Otago classics lecturer Dr Gwynaeth McIntyre is working on the digitisation of the museum's collection of coins, which ties into her own research as well as benefiting the museum.

By the end of 2019, she hopes to create a website accessible to the public, featuring both the digital photographs of the coins and information about them.

The coins, which would once have been used to purchase goods in shops, provided a tangible connection to another civilisation, she said.

Sometimes the message the emperor of the time wished to convey on the coin was a "different kind of narrative'' to the one found in literary or historical sources.

Promotion of family members and celebrating military victories were also depicted on the coins.

"You basically want to show that you love the gods, or that the gods are on your side.''

Dr McIntyre's area of expertise is the short but colourful dynasty of Julio-Claudian emperors from Augustus - Julius Caesar's great-nephew, who became emperor in 27BC- to the final ruler of the family, Nero, whose reign came to a grisly end in AD 68.

However the university's collection - second only in Australasia to the collection of Macquarie University, in Sydney - stretches beyond that time, from the third century BC to the fifth century AD, Dr McIntyre said.

There are in the region of 1200 bronze and silver coins, bearing a variety of designs.

There was only one gold coin in the whole collection, which was kept separate, Dr McIntyre said. It was rare, but she could not estimate its value.

The exception was Emperor Nero, who did not have any numbers indicating how long he had reigned on his coins.

However, his profile appeared to become more corpulent as he aged, making it possible to guess what time in his reign the coin was minted, Dr McIntyre said.

It was not necessarily a sign Nero was actually overweight - the change in his profile could also be a deliberate way of signalling wealth.

Many of the coins came from Dunedin collector Willi Fels, but a sizable proportion were also from Archdeacon Gordon Hay Gavin from New Plymouth, and part of the work Dr McIntyre was doing was simply to understand the Archdeacon's decision to gift the coin collection to the museum, when he had no connection to the area.

It was unknown where exactly the coins were from, but at least some of the museum's collection came from a hoard found near Gibraltar, in Southern Spain - a collection of treasure soldiers would bury or otherwise hide when they went to war.

While hoards were usually associated with the military, it was not unknown for civilians living through times of upheaval to do the same thing, Dr McIntyre said.

Dr McIntyre, speaking in December, said she would spend the next few months not only cataloguing the coins, but going through the museum's records about the collection to put together a better timeline of when and how they were acquired, and how the collection came together.