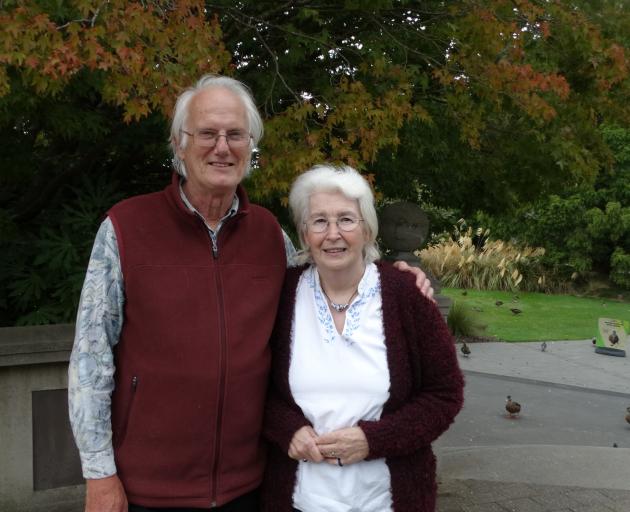 Nigel and Deirdre Tucker are part of a Dunedin group, Music for Dementia, which uses music to help people with dementia.PHOTO: BRENDA HARWOOD
A small-but-dedicated group of Dunedin volunteers are using personalised musical therapy to help stimulate deep-seated memories among people with dementia.

The brainchild of Deirdre and Nigel Tucker, who were inspired by a university of the Third Age series on brain health presented by Associate Prof Yoram Barak, the Music for Dementia group was formed late last year.

"The effect of that documentary was electrifying - people were moved to tears,'' Mrs Tucker said.

The couple learned that, while the Music & Memory concept was now helping many people in the United States, nothing similar was available in New Zealand.

So they set about forming the Music for Dementia group, establishing it as a charitable trust, and developing a pilot project here in Dunedin.

The group is led by Mr and Mrs Tucker and Lynda Jackson, and involves a small, keen group of volunteers.

"It has been an interesting process getting to this point, but our whole focus is to try and alleviate the suffering of people who have dementia,'' Mrs Tucker said.

The crux of the approach is to use music that has significance for the person with dementia, especially from their early years, as a means of triggering memories.

So far, the group has worked with five Dunedin people, with the support of Alzheimer's Otago, and is pleased with the results so far.

"The families have told us that the music has been of benefit - not just for the person with dementia, but for their carers and families,'' Mr Tucker said.

The music had helped make the people happy and relaxed, and had helped stimulate some memories, he said.

Finding out which music was best for each person could be a tricky process and involved research and finding the right questions to ask.

Once a person's musical preferences were established, volunteers set about creating personalised playlists, then played to the person on headsets.

"It can be a very time-consuming and technical process,'' Mr Tucker said.

So far, the musical choices have included bagpipe music, Abba, Early English music and radio hits from the '60s and '70s.

"The variety is quite extraordinary, and shows how important it is to find music that is relevant and means something to the person,'' he said.

Mrs Tucker said, now that the Music for Dementia group was firmly established, members were keen to develop the service.

The group aims to work with 100 people in Dunedin this year, and also has plans to expand its sphere of influence into wider Otago and eventually the rest of New Zealand.

"For this to happen we need to acquire a core of dedicated, trained volunteers to service the needs of dementia patients here and further afield,'' she said.

So far, the Music for Dementia group had been largely self-funded, but more funds would be needed to help expand, she said.

"We believe that what we are doing changes lives and could become a healthcare standard in New Zealand in the fullness of time.''

The Brain Health Research Centre, Neurological Foundation, and Otago Museum invite the public to learn what's going on inside their heads during Brain Awareness Week, March 11 to 17.

Offering a busy programme of public talks, on neuroplasticity, the history of your brain, how to learn anything, and neurological research, the week will also feature a giant inflatable brain in the Octagon and Dunedin Brain Day on March 16.

• March 11: Your Brain's Ability to Learn and Adapt to Change, with Professor John Rostas, of the University of Newcastle, Australia, 5.30pm, Otago Museum.

• March 12 and 13: The History of Your Brain, two evening talks on the stages of the brain with expert speakers, 5.45pm, Otago Museum.

• March 14: Brains in the Octagon - members of neurological community groups and Brain Health Research Centre researchers with the giant inflatable brain, 11am to 2pm, Upper Octagon.