Music over for trader 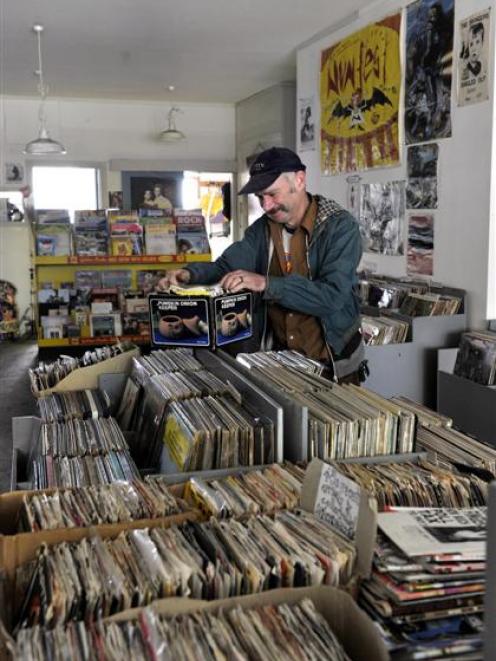 Records Records owner Patrick Faigan prepares his remaining stock yesterday for sale. The shop is closing tomorrow after nearly four decades of trading. Photo by Gerard O'Brien.
The needle lifts off the vinyl for a Dunedin music institution tomorrow.

Records Records was the catalyst for the Dunedin Sound era of the 1980s, which put the city on the international music stage.

"I've got mixed feelings about closing. It's the end of an era in some ways, but it's been losing money for a while and it's time to get out," owner Patrick Faigan said yesterday.

Mr Faigan bought Records Records five years ago from Roy Colbert, who opened the business in 1971.

The record shop helped shape the Dunedin Sound era of the early 1980s, as it was frequented by musicians from bands such as The Enemy, Sneaky Feelings, The Clean, The Bats, The Chills, The Verlaines, The 3Ds and Straitjacket Fits.

"The greater part of my musical education took place in that shop, under the guidance of Roy Colbert," Chills founder Martin Phillipps said yesterday.

Mr Colbert said the success of the business had surprised him.

"For a shop that started by accident with no name and a projected life of six months, it turned into a remarkable 34 years," he said yesterday.

"People from around the world used to come in.

More often than not, they'd find someone from the Dunedin Sound there, which was pretty exciting for someone from Holland."

He moved the shop from its long-time home in Stuart St to Princes St two years ago.

However, changes in recording technology and music-buying habits had sounded its death knell, he said.

"The recorded music scene really changed when Real Groovy shut down [in 2008].

They used to bring a lot of new stuff into town. The pool is much more shallow now. People who are really into music tend to buy it on Trade Me or eBay these days.

"We've never really had any big-ticket items. Most of the stuff is pretty ordinary and sells for between $8 and $15 second-hand. But, you can often get the same thing brand new for under $10 at The Warehouse.

"You just can't compete with that. From what I hear, everyone in the second-hand business is struggling a bit."

Mr Faigan said he had no plans for the immediate future.