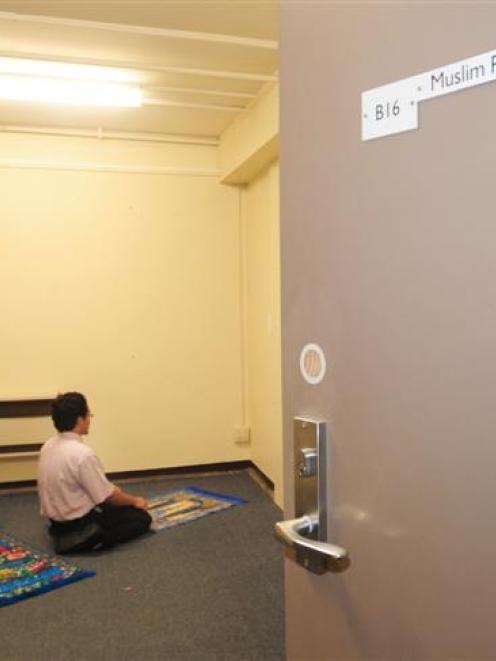 Muslim Univer-sity of Otago students (from left) Yassar Alamri (21), from Saudi Arabia, Hikmat Noorebad (24), from Afghanistan, and Musab Hassan (23), from Malaysia, pray in the rooms which have just been assigned to them. Photo by Craig Baxter.
Their new prayer spaces might be small and austere, but the 200-300 Muslim students at the University of Otago do not mind. They are just pleased to have been given a private place to say their daily prayers after more than six years of asking.

Muslims must pray five times a day and, for many students, the mosque in Clyde St was too far away, Muslim Student Association president Musab Hassan said.

Until now, students had prayed "anywhere and everywhere", including the library, lecture rooms, tutorial rooms and libraries. While other students were generally comfortable about Muslims praying nearby, it was good to have a defined area to go to, he said.

"Our prayers involve standing and kneeling, so we are quite pleased to have somewhere to go to do that. We've been waiting many years."

The university administration has made available a compact suite of rooms in the basement of the music department. While men and women prayed in the same room at the mosque, each gender had been allocated its own room at the university, Mr Hassan, a medical student, said. Another room had been set aside as a multi-faith meditation area.

The rooms were bare, but it was hoped items including copies of the Koran - the holy book of Islam - and prayer timetables could be added.

Decoration was not important in the Muslim faith, medical student Yassar Almari said, although decoration was permitted.

"We don't mind our room the way it is. We'll leave the decorating to the girls."

The rooms would be mostly used for lunchtime prayers, held between noon and 1pm, and afternoon prayers, held between 3.30pm and 5.30pm in winter and 5pm and 7pm in summer. Prayers only took a short time and students were able to carry them out during those times and still work around their lectures and other commitments, Mr Hassan said.