The give way sign at the intersection of Fea and Orbell Sts has been re-erected but the barrier remains unrepaired. PHOTO: GERARD O'BRIEN
A Dunedin resident’s quick reflexes saved her from being decapitated by a road barrier after her car slid on ice during a recent cold snap.

The Dunedin City Council said it would review the appropriateness of the barrier.

Ms Brown left her house about 7.45am one day late last month.

She had her sister beside her in the car and her 4-year-old daughter in the back.

Ms Brown drove down Fea St, as she had done every day since she moved down from Manawatu about two months ago.

Like most residents of the area, she drove to work via Fea St. 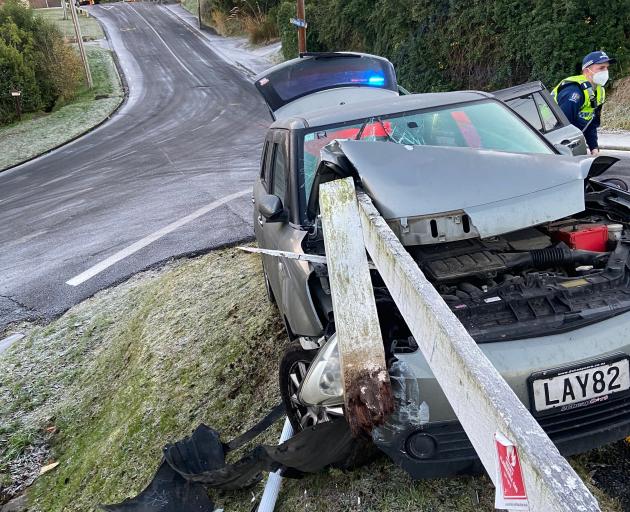 Dunedin resident Olivia Brown feels lucky to be alive after a railing went through her windshield when her car crashed into a safety barrier at the intersection of Fea and Orbell Sts recently. PHOTO: SUPPLIED
When a car came out from Orbell St, she was travelling at about 30kmh and she braked to give it extra space.

However, she felt the car pick up speed as it slid down the hill.

The cars were on a collision course, so she tried to turn into Orbell St.

While she missed the other car, her vehicle smashed into a wooden barrier which she saw lift and come towards her.

She threw herself sideways as the wooden beam crashed through the windshield, right where her head had been a few seconds earlier, and narrowly missed her daughter.

Police, firefighters and a doctor had all told her that the barrier was insufficient to stop a car.

She was hoping the council would let replacement costs slide and planned to raise awareness about how to drive on frosty roads.

She believed Fea St needed to be treated for ice in cold weather. 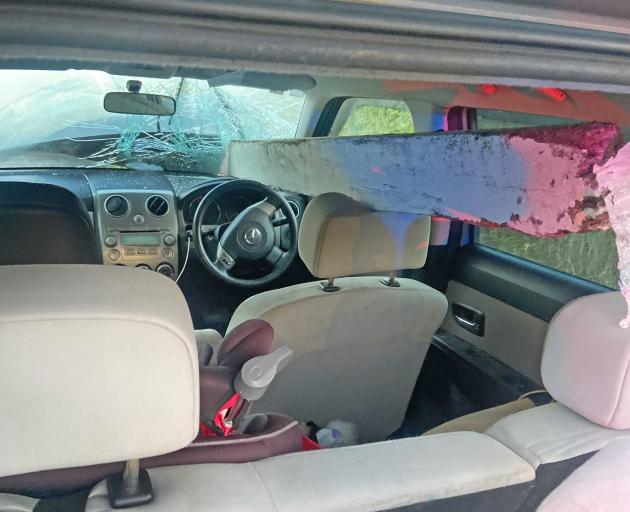 There were three people in the car at the time of the crash. PHOTO: SUPPLIED
The road was so frosty on the day of the crash that even the tow truck started slipping, she said.

While she was getting over her near-death experience, she saw another three cars slipping on the road.

Calcium magnesium acetate had been applied to the road the day before the crash and such treatments normally remained effective for up to three days.

Conditions on the morning of the crash were extreme and the road was closed following the crash until conditions improved.

The council would look at whether the barrier was appropriate. .

While it could seek to recover costs from drivers in these situations, the low cost of reinstatement for the sign post and railing meant it would not do so in this instance, the spokesman said.