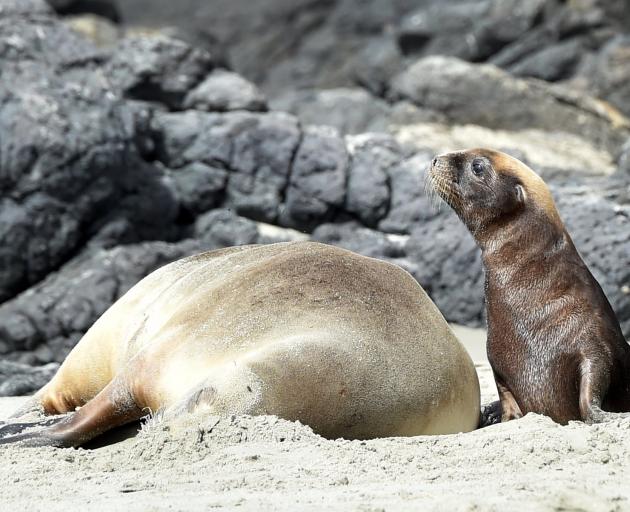 New Zealand sea lion, Huru, and her pup rest at Penguin Place, on Otago Peninsula, yesterday. PHOTO: PETER MCINTOSH
Dunedin has some new residents and they are putting on quite the show.

Twelve live New Zealand sea lion pup births and one suspected stillbirth have been recorded since the breeding season began last month and the count is still on.

Huru, who moved her pup about 10m in front of the viewing system at Penguin Place’s Pipikaretu reserve, was spotted teaching her pup to swim last week.

Ms Whyte said when she saw them on Friday, the pup was not so keen to get its flippers wet.

"I watched Huru try to convince her pup to go for its first swim there on the beach — it was not having any of it.

"It took the entire length of the beach for the pup to even venture past the high tide mark and get its flippers wet, then it bailed on the swim and ran off into the dunes," she said.

Huru had also been stashing her pup in a small wooden A-frame that was meant for hoiho while she was out fishing, allowing for a good view of the pair by staff and visitors.

Joy, who famously had her pups at Warrington and was carefully watched over by the community during a recent bush fire, has recently vacated the area with her pup.

Ms Whyte said that was not necessarily caused by the fire, as Joy was usually consistent in moving her pups around the 21-day mark.

The pup was tagged by Ms Whyte and Department of Conservation coastal ranger Jim Fyfe in anticipation of the move, during which time they discovered the pup was a female.

"This is really exciting as the young one is another potential extension of Joy’s legacy," she said.