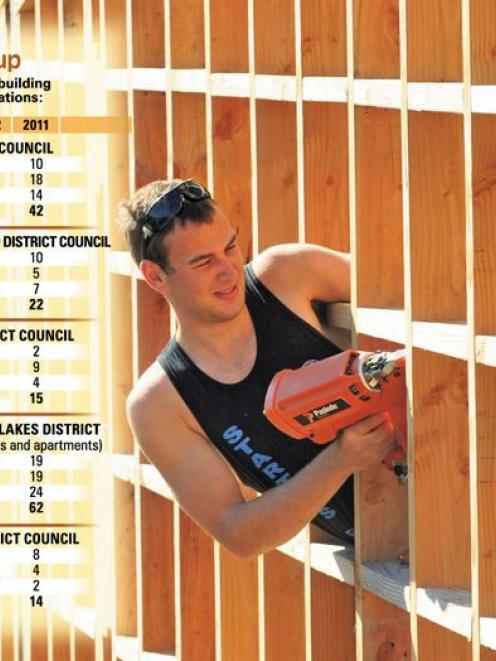 The number of building consents issued for new dwellings in Dunedin in the first three months this year were up 30% compared with the corresponding quarter last year, while consents for homes and apartments in the Queenstown-Lakes district rose 29% over the same period.

"Will it [the increase] continue? I don't know. I try to pick trends but I don't always get it right. But [mortgage] money is still cheap and there seems to be interest in sections in new subdivisions."

"Last year was quite depressed for new building. It seems like this year we might be back to 2010 levels."

Mr McLeod expected a consent applications backlog would be cleared within two weeks. His department received 240 applications in February, 150 of them in the final week, as people rushed to beat new building regulations which came into effect on March 1.

Peter Laurenson, building manager for Lakes Environmental, the council-controlled organisation which issues consents for the Queenstown-Lakes District Council, said the majority of consents issued this year were for stand-alone homes.

Overall, the number and values of consents for new dwellings, commercial buildings and alterations issued for the first nine months of this financial year was on a par with the corresponding period the previous year.

Real Estate Institute of New Zealand Central Otago Lakes spokesman Kelvin Collins said section prices in the Lakes District had dropped to the point where building a new home was a viable option for more people.

The increase in consents was "quite a good sign" for the building industry and for home owners, but Mr Collins said not enough new homes were being built to cope with population growth in the district.

The population was growing about 3% annually, requiring about 300 new homes a year, he said.

Consents were about the same in Central Otago and had dropped by a third in Clutha. The monthly figures in Clutha were variable because of the small size of the district, council communications co-ordinator Jamie Shaw said.

"We are looking at the beginning of a trend upwards, which is good."