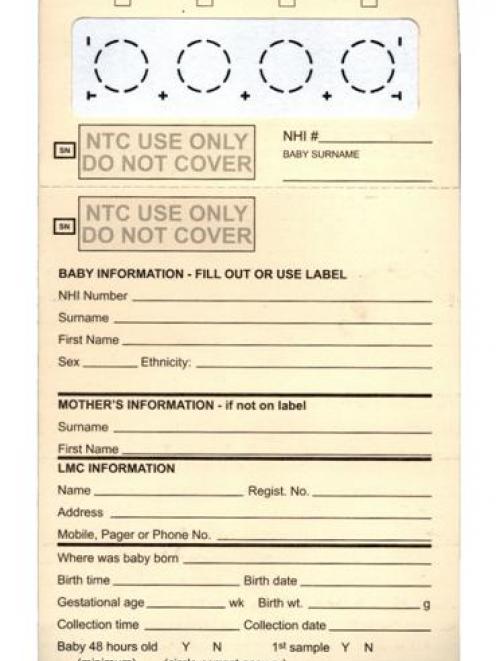 A Guthrie card.
The first use of New Zealand newborn baby bloodspot cards for research has now been approved. Elspeth McLean, who has been following developments surrounding the 46-year-old national card collection for several years, updates the story.

One research project involving newborn baby bloodspot cards has been approved since rules for managing the collection of more than 2 million cards came in more than three years ago.

The blood, stored on Guthrie cards, has been collected under the Newborn Metabolic Screening Programme from the heels of babies since 1969, to diagnose more than 20 metabolic conditions.

The Ministry of Health has approved the testing of 154 blood spot samples in a study related to one of the conditions the programme tests for: very long chain acyl-CoA dehydrogenase deficiency (VLCADD).

Because the cards for this study are from babies born since July 1, 2011, the researchers will not require individuals to consent to their use.

Parents are deemed to have agreed to such a use through the consent process at the time the baby's blood was taken.

If researchers had wished to use blood collected before that time, they would require individuals' written consent.

Concern raised by Privacy Commissioner Bruce Slane about the lack of proper rules around consent, retention and access to the samples led to public consultation on the matter in 2007.

Documents released under the Official Information Act from later behind-closed-doors meetings of ‘‘stakeholders'' discussing the policy development showed there was considerable friction between health consumer groups and researchers over the future use of the cards. A major concern for some consumer representatives was that few parents knew the bloodspots had been kept after the testing was completed and therefore it would unethical to use them without consent.

The VLCADD disorder which is the subject of the approved research is one of nine fatty acid oxidation disorders the programme screens for. About five children a year are found to have one of these disorders.

People diagnosed with VLCADD have difficulty converting certain fats into energy and should not go for long periods without food. It can cause severe symptoms and even death, if children with it are exposed to significant environmental stress, such as infection.

Screening for this condition looks for the chemical indicative of the deficiency, known as C14.1. New Zealand has a high incidence of babies with high levels of this, but it does not result in high numbers later exhibiting the disease.

The research will test the hypothesis that most of the cases of elevated C14.1 represent a high prevalence of a particular genetic variation in the Maori population which is a benign variant.

Two more research proposals are being considered by the Ministry of Health.

It is seeking extra information regarding an application to use cards in a study of the underlying susceptibility to a rare congenital liver disorder, biliary atresia.

This study would involve performing whole genome sequencing on the DNA from blood spot samples of individuals with the disorder born in New Zealand. It would be undertaken with the consent of individuals' families, a ministry spokesman said.

It is part of ongoing University of Otago research into the disease led by Prof Stephen Robertson.

Biliary atresia, which is fatal if not diagnosed early and surgically treated, is more common in Maori and Pasifika populations, where it affects one in 3000-5000 children.

Another research proposal which has been under consideration since 2013 is connected to the comprehensive longitudinal study on New Zealand babies called the Growing Up in NZ study.

Cards which would be involved in this research were pre June 2011 and would, therefore, require written parental consent.

The Ministry of Health said further information had been requested from the researchers and a decision was expected early this year.

The study involves almost 7000 children born between April 2009 and March 2010 (and their families) from the Auckland, Counties Manukau and Waikato district health board areas.

Information from the cards would be used to look at the effect of vitamin D status at birth on later health.

Vitamin D deficiency in young children can lead to rickets, a disease which can affect soft bones, resulting in deformities (such as bowed legs) or fractures.