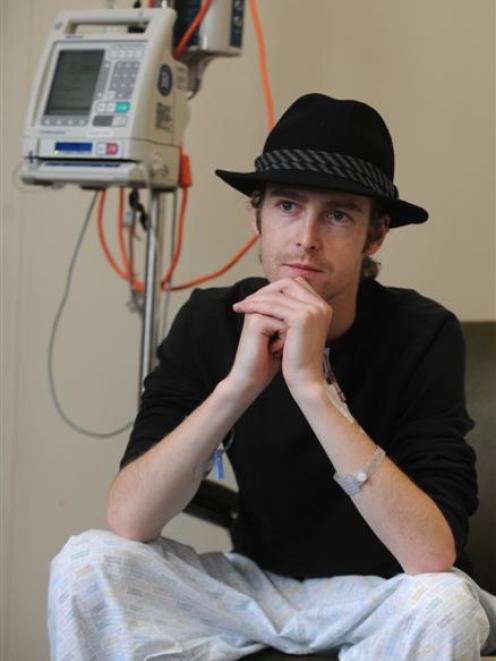 Crohn's disease sufferer Joe Noon cannot get the drug he believes could give him a near normal life. Photo by Peter McIntosh.
For Joe Noon, just eating a couple of mouthfuls of toast causes extreme pain.

He suffers from a condition which affects the gastrointestinal tract and causes pain, weight loss, diarrhoea and vomiting.

It is called Crohn's disease and the 24-year-old Dunedin man describes it as "depressing in every way imaginable".

And he believes he is being denied access to a potentially effective drug because of the cost.

Mr Noon was diagnosed with the incurable gastrointestinal tract disease in 2007.

He has no savings, no health insurance and, it seems, no hope of the health system paying for the drug, Infliximab, he believes he needs.

He spoke to the Otago Daily Times from his bed in Dunedin Hospital this week and said while he had been told he could not have the drug, it was available to other patients who had insurance or could pay for it.

Infliximab is a reasonably new drug, used when other treatment has failed.

Mr Noon believes it is his best chance of resuming a near-normal life, having been advised over the last few months that he was "a prime candidate" for the drug.

"But when I came in on Friday, the guy down in the emergency department said, `Sadly, no.' "I think it's just something with the price, the budget, the fact that the Dunedin hospital... has no money."

A website, www.infliximab.org, indicates the cost for one year's supply of the drug for someone of Mr Noon's weight would be about $US18,000.

A spokesman for Pharmac said earlier this week Infliximab was not a drug funded by the government agency and was used in hospitals "at the discretion" of district health boards.

Board chief executive Brian Rousseau said the board would not fund drugs like Infliximab while there was no national agreement.

"If every district health board just applied its own rules, we would have a system that became very unbalanced. It's extremely tough.

"I'd love to be able to provide the drug. I'm not prepared to do that in isolation, even if I had the money... because the system has got to work in an equitable way."

He said there was no discussion at present about a national agreement.

He knew of one person in the hospital who was being given the drug.

"The guy who's on it here is fantastic. He apparently hasn't been having symptoms. He's normal."

Mr Rousseau said the drug could be privately funded.

Mr Noon said he had been treated with a steroid which "masked over" the cramps, pain and haemorrhaging.

A commonly used Crohn's disease drug, Pentasa, had not helped him.

Surgery had also been ruled out because of the likelihood it would not solve the problem in the longer term.

Mr Noon, who has never met his father and left home at 15, has no way of paying for treatment.

He will be moving into a Dunedin City Council flat when he leaves hospital, after a 10-day stay, tomorrow.

• He needs a drug called Infliximab.

• He has no health insurance.

• He cannot get health insurance.