'No doubt' over fire cause as authorities keep mum 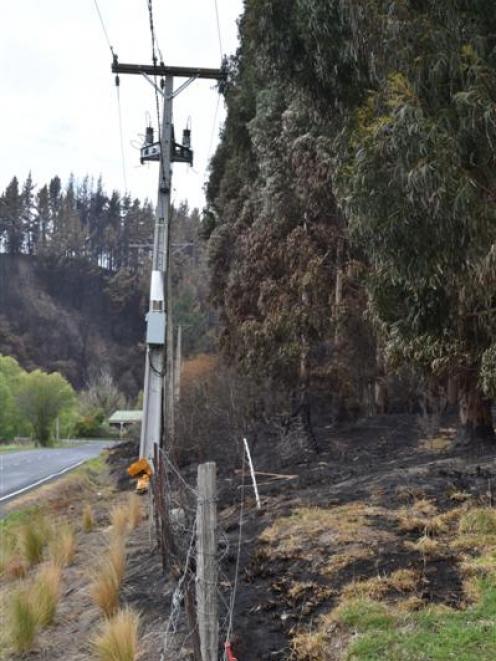 Scorched eucalyptus trees near power lines yesterday where Saddle Hill resident Richard Wilden says the fire began. Photo by Gregor Richardson.
The cause of a fire which raged across Saddle Hill last week will not be released to the public, the Otago Rural Fire Authority says.

But a resident says he knows how the fire began.

Authority deputy principal rural fire officer Jamie Cowan, who is overseeing an investigation into the fire's cause, confirmed yesterday the information would be kept private as it could be used in legal proceedings to recover costs.

A debrief would be held between the authority, the New Zealand Fire Service and police after the investigation, Mr Cowan said.

The findings of that were also likely to be kept private, unless they were of use to the public, he said.

''If lessons can be learned from it for the public's perspective regarding reduction and things they can do to help prevent fires starting, then we may [release the review].''

In any case, the cause of Wednesday's fire, described by authority deputy principal rural fire officer Graeme Still as the most threatening in Otago for 20 years, would not be disclosed.

However, Saddle Hill resident Richard Wilden (57), who spent more than 24 hours protecting his and his neighbours' homes during the blaze, said he had the answer.

Mr Wilden said that on the day of the fire he smelled smoke after going outside when power went out at his house in Saddle Hill Rd.

He went to a spot about 700m over the hill and saw fire burning below where a eucalyptus tree was hanging over a power line.

Mr Wilden said he was certain that was the spot the fire had started.

''Absolutely, without a doubt,'' he said.

''There are two possibilities: the wires could have clipped together and arced or, more likely, a branch of the tree has come down on to the wires.

''The wind was coming from the northwest. There was no charred grass beyond that point.

''It doesn't take too much deduction to work out that's what's happened.

''It's happened before [further up the road]. And that's what concerns me - that this could happen twice,'' Mr Wilden said.

Mr Still said last week two possible causes were being investigated but could not confirm what those were.

Mr Cowan refused to comment on whether that information was accurate.

A spokesman for the farmstay said yesterday the business had been spoken to by fire investigators, but ''that's it, nothing else''.

The operators were not at the property at the time the fire started, the spokesman said.