'No guarantees' over Dunedin courthouse 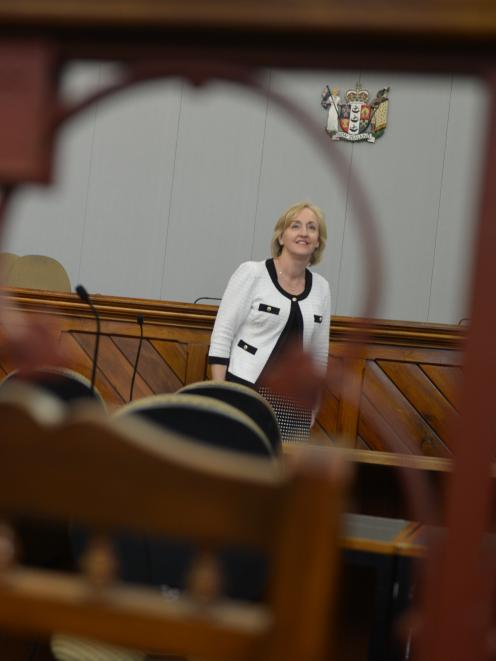 Justice Minister Amy Adams, inside Dunedin's historic courthouse yesterday, could shed no light on the building's future. PHOTO: STEPHEN JAQUIERY
Visiting the courthouse yesterday, the minister said it appeared Dr Clark was getting his information ''from thin air'', and such an announcement ''was never the intention''.

No timeframe or budget had been set for the strengthening needed for court services to return, Ms Adams said.

She could not confirm a decision would be made during this parliamentary term.

When asked whether the courthouse could be closed for good, Ms Adams said that was not her ''current intention'' but it was ''just too soon to say''.

But she said there were no indications the building would not be saved and many people, including Dunedin's legal community, the Dunedin City Council and the Historic Places Trust, would be upset if it was not retained.

The courthouse was deemed unsafe in 2011, and the ministry had prioritised getting court services established on other sites, she said. Now the focus was on finding a business case to save the courthouse.

Changes last May to earthquake strengthening rules had delayed the process as engineers now had a new framework to work within.

Many restoration options were being explored, and all those she had seen put the cost ''well north of $10 million''.

That meant if a preferred option could be found, it would need to be taken to cabinet for funding approval.

No limit was set to what the ministry would spend, and all decisions on funding would have to wait until the engineering reports and business case were completed.

There was no timeframe for that either, she said.

The lack of a timeline was in contrast to a 2013 statement made to the ODT by then courts minister Chester Burrows.

Mr Burrows said it had taken engineers ''a considerable time to understand what is necessary'' to repair the historic courthouse, which was ''a top priority'' for the Ministry of Justice.

He said the necessary work would require the closure of the courthouse ''for an estimated two years''.

Two years later, Ms Adams accepted the process was taking a long time, but said rushing it was the worst outcome. She called the cost of having two courthouse sites in the city at once ''the lesser of two evils'' when compared with rushing the investigation process.

Her first obligation was to the safety of those working in the building, and that safety was at risk as the building stood now, she said.

Dr Clark said yesterday he stood by last week's story, and by his sources.

''I think that the public can read a lot into the fact that it took [Ms Adams] three days to announce that there wasn't an announcement.''

He said he was looking forward to ''a delayed announcement in due course''.