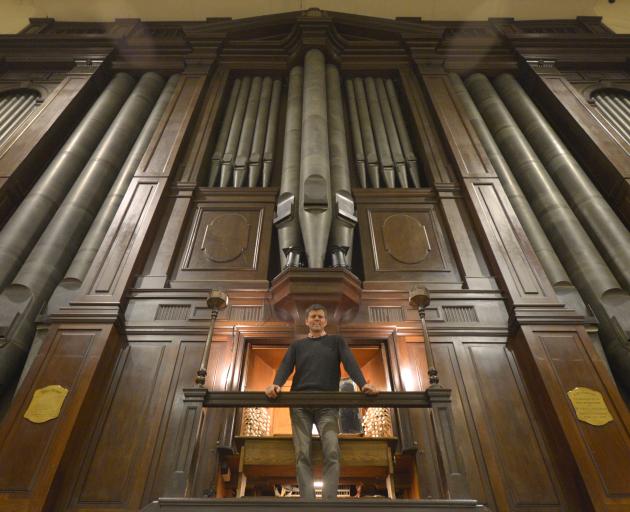 Dunedin City organist David Burchell prepares to play Norma, the Dunedin Town Hall organ, in a celebration of the organ's 100th birthday. PHOTO: GERARD O'BRIEN
A birthday cake with 100 burning candles atop - if you have ever wondered if Norma could blow them all out with a fortissimo chord, Sunday will be the day to find out.

The Dunedin Town Hall organ might be 100 years old, but she still had a fine set of pipes, Dunedin City organist David Burchell said yesterday.

He hoped most of Norma's 3500 pipes would get a good blasting during her official birthday celebration concert, informally titled "Norma's Big Birthday Bash".

Mr Burchell said he would be joined in the noteworthy milestone by Cellists of Otago (a 16-strong cello ensemble) and City Choir Dunedin, in performances of a wide variety of popular classical music, including the Adagio from Saint-Saens's Organ Symphony, the Pilgrim's Chorus from Wagner's Tannhauser, Albinoni's Adagio and excerpts from Faure's Requiem and Elgar's Enigma Variations. 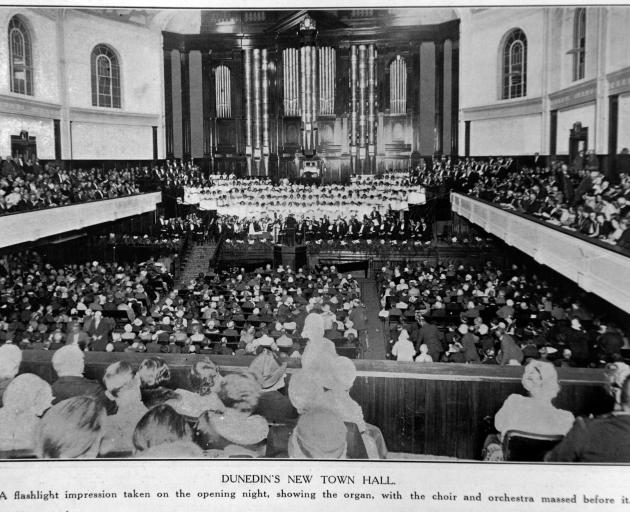 An Otago Witness photograph of the Dunedin Town Hall organ, taken at the hall's opening concert in February 1930. PHOTO: OTAGO IMAGES
Norma was built in 1919 by William Hill and Son, of London, and was originally known as the Bathurst Mammoth Cathedral Organ.

It toured England and was set up in halls and theatres as part of a travelling vaudeville show.

In 1924, the organ was enlarged when it was installed at Wembley Stadium for the British Empire Exhibition before being moved to Tunbridge Wells Opera House.

From there, it was given to Dunedin by Mr and Mrs A.S. Paterson, and was installed in the newly built Dunedin Town Hall, which officially opened in February 1930.

The organ is one of 27 of the world's most famous pipe organs and recently featured in a British TV documentary.

It combines conventional organ sounds with orchestral tone colours and percussion, and few instruments of this type have survived unaltered.

The concert is at the Dunedin Town Hall this Sunday, from 4pm to 6pm.