Not totally tea but 43 years of service 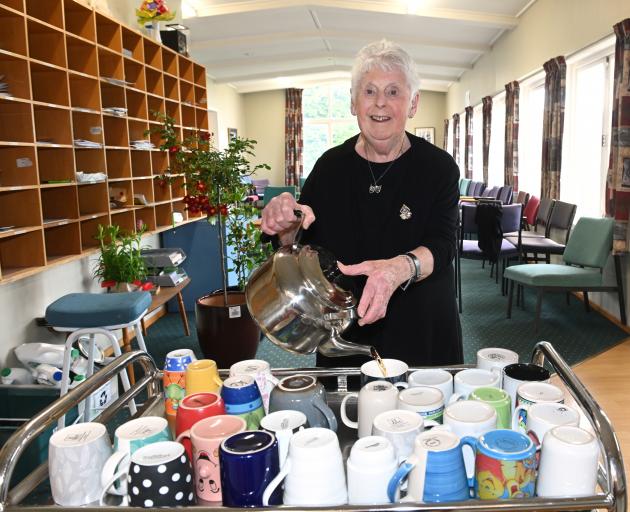 Pat Cross (80) pours a last cup of tea yesterday. PHOTO: LINDA ROBERTSON
Pat Cross thought it would be a brief fill-in job when she began as the tea lady at Queen's High School, Dunedin, back in 1976.

She certainly never dreamed it would not be until yesterday — 43 years of wide-ranging teacher’s assistant work later — that she would finally retire.

Mrs Cross (nee Donovan, 80) had studied at King Edward Technical College and worked as an office dictation typist before taking time out to raise her children David and Susan.

Later, in her mid-30s, she planned to work for a while at the school before returning to a great deal more of the typing.

But after reaching Queens she never went back.

Initially in awe of all teachers, she soon realised there was a great deal more to life behind the scenes than simply pouring the tea out of an oversized teapot.

She soon left those duties behind and undertook a great deal of mutually beneficial work in a host of departments and sections, including art, science, the library and English.

Her house was only a few blocks away, and she soon found herself thoroughly enjoying "the opportunities to work in different areas of the school".

She found Queens a close and supportive environment, and thrived there.

"It can be just like a community in itself," she added.

She had earlier also greatly enjoyed her work as a site representative for support staff at the school for the New Zealand Educational Institute for about 20 years.

Another highlight had been when she was named as one of the school’s "living treasures".

"Working in the different departments made me feel part of the school and I understood the education system."

Yesterday was officially her last day, after she had resumed the tea duties over the past couple of years.

However, she planned to keep in touch with the school and its staff.

Speaking after a farewell function for Mrs Cross and some other school staff, principal Barbara Agnew said she had made a big contribution, and her personality had also made a positive impression.

Ms Agnew praised "her care for us all" that flowed through the whole school "and every day it’s the smile".