Nothing to hide, says car buyer 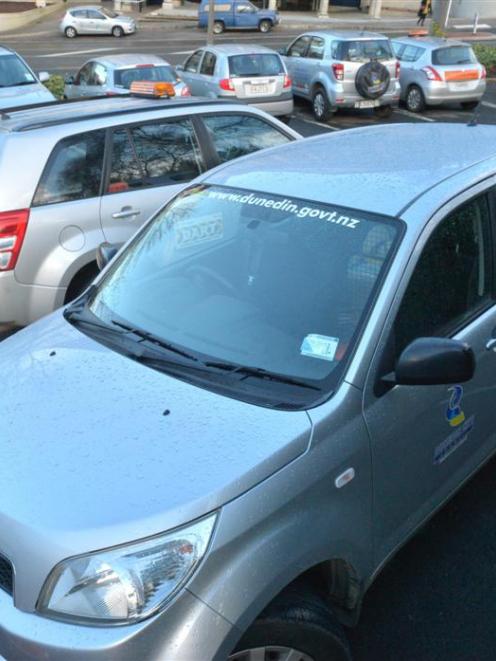 Dunedin City Council vehicles. Photo by ODT.
Wayne ''Tubby'' McFadyen says he has nothing to hide.

Instead, the man identified as one of the main buyers of Citifleet vehicles says the Dunedin City Council should be looking ''in the mirror'' if it wants to point the finger.

''If there's anyone to blame, it all falls on their heads too. They can blame everyone else for buying vehicles and whatever they want to do, but at the end of the day the buck stops with them.

''If I had to stand before the council - Dave Cull and the whole lot of them - I'd say they all need to resign, because they're not doing their job.''

Mr McFadyen was speaking to the Otago Daily Times after being identified in the leaked Deloitte report as being at the centre of the ''McFadyen cluster'' of vehicle purchases.

The report showed he bought at least eight vehicles, while members of his extended family bought nine more, bringing the total to 17.

He was also said to have acted as a go-between for another private buyer, Destry Duff, who together with other members of the Duff family bought a further 11 cars, the report said.

Mr McFadyen told the ODT he disputed the numbers of vehicles attached to his name, saying he, personally, had bought only six vehicles.

He did not want to discuss the Deloitte report's contents in detail, saying he was yet to see a full version, but had ''nothing to hide''.

Instead, he defended former Citifleet team leader Brent Bachop and believed the council had questions of its own to answer.

Mr McFadyen's brother, Saddle Hill Community Board member Keith McFadyen, was among those identified as buying a single vehicle from Mr Bachop.

Contacted by the ODT, he maintained he - like others - had done nothing wrong.

''I, along with probably other people, are all victims in this, and it's really sad.''

Fellow car buyers Shayne Perkins and Destry Duff were also identified in the Deloitte report as among the larger individual buyers.

Mr Perkins was said by Deloitte to have purchased six vehicles, while members of his wider family bought another eight, bringing the total to 14 vehicles.

Mr Perkins, a former council employee, was also the brother-in-law of Mr Bachop.

So, too, did Destry Duff, who purchased five cars, while members of his wider family bought six more, bringing the total to 11.

The McFadyen family purchases were said by Deloitte to have cost the council $119,326. Proceeds from just one of the 17 vehicle sales made its way back to the council's accounts.

The Duff family purchases cost the council $81,478 and proceeds from just two of the 11 sales made it back to the council.

Another $84,500 was lost as a result of the Perkins family purchases and none of the proceeds from 14 sales made it back to the council, Deloitte found.

Deloitte investigators interviewed all three men during their fraud probe, but all three argued Mr Bachop was entitled to sell the cars and maintained they had done nothing wrong.

Mr McFadyen told his interviewers he met Mr Bachop at least 15 years earlier, when Mr McFadyen worked as a motor mechanic at Anngow Motors, which serviced the council's vehicle fleet.

Mr McFadyen said he first bought a council vehicle from Mr Bachop's predecessor, Bob Heath, before continuing to do so when Mr Bachop took over.

However, Mr McFadyen told Deloitte he believed Mr Bachop had the authority to sell vehicles, and assumed all money was being returned to the council, the report said.

Mr Duff told Deloitte his ''main contact'' for the vehicle sales was Mr McFadyen, who told Mr Duff when vehicles were coming up for sale.

All payments were made to Mr McFadyen, who was said to have passed the money to Mr Bachop, although it never made it back to the council's accounts, the report said.

''This suggests that Mr Bachop or Mr McFadyen kept a significant proportion of the sale proceeds for these vehicles,'' the report said.

Mr Perkins told Deloitte he purchased vehicles with the intention of tidying them up and on-selling them for a profit, but ''continually asked Mr Bachop if this was 'kosher', and was told that it was''.