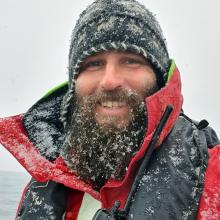 The former Dunedin man has been stranded in Argentina due to the Covid-19 pandemic, but he may now have a way to leave the country.

He was the first mate on expedition vessel Australis, which was on a trip with Natural History NZ to document the effects of climate change in the Antarctic.

That was cut short when the Covid-19 pandemic began to worsen.

He and his group had been stuck on an island called Tierra del Fuego since March 26, but they have finally managed to make it as far as Buenos Aires.

It had not been an easy process, and several promising plans had fallen through at the last minute.

"We managed to find a company who had the contacts to get permits and a plane through, with a lot of help with paperwork from the embassies, [and] local doctors.

"We had a deadline for paperwork of 8pm and the final documents were supplied and gotten through at 7.59pm. Skin-of-teeth success."

He and his group caught a flight to Buenos Aires, where they remained yesterday.

They had flights booked to leave today, and were hoping they did not fall through, he said.

"I left from Sydney last year, so that's where the company will return me to — we fly from Buenos Aires to Amsterdam, Amsterdam to Doha, Doha to Sydney.

"Long way around, but if it all works it gets me that much closer to home."

From there he was hoping to get to the Whitsundays, where his partner was.

"After six months working away, I think some quality time together is well overdue."