At odds over cycleway timing 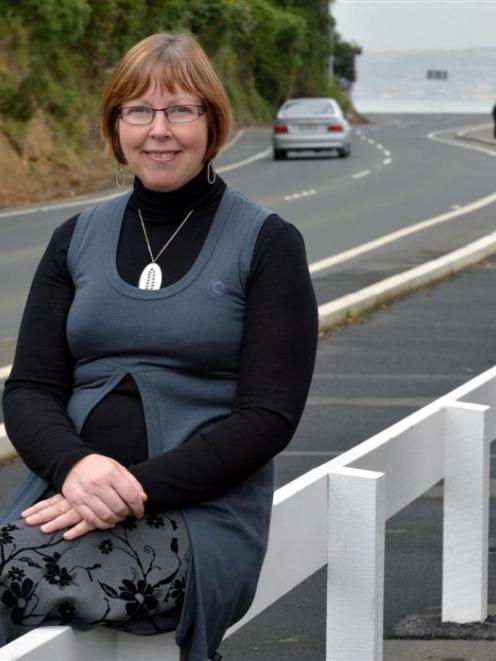 Macandrew Bay School principal Bernadette Newlands says the cycle/walkway at Macandrew Bay has improved safety for families dropping off and picking up children at the school, as well as benefiting the wider community, and the same work should be done in the other peninsula communities before the Vauxhall-Glenfalloch end of the road is undertaking. Photo by Gerard O'Brien.
There was clear evidence of the division in opinion on the order of road-widening work on Otago Peninsula as Dunedin city councillors began hearing from users of the road yesterday.

Dunedin residents were asked in this year's consultation on the council's annual plan what order they preferred the work to be done in, after members of the community repeatedly raised the matter with the council.

About 600 people wrote in expressing their opinions and several turned up yesterday to air their views.

The submissions revealed peninsula communities were keen to achieve safe interconnectedness for themselves and their children, while recreational users, tourism interests and commuters saw the priority as the area with the greatest volume of users - Vauxhall to Glenfalloch section.

Mrs Newlands said the cycle/walkway at Macandrew Bay had made a big difference for families getting their children more safely to school and had provided other benefits, such as residents walking for fitness, and so it was vital the other peninsula centres, Broad Bay and Portobello, got their sections done as soon as possible, which meant the council should stick with the current planned sequence for works.

Mr Clearwater said the Harington Point Rd and Portobello to Broad Bay sections were the most dangerous and were next to be done. People had anticipated this

order for years, and to deviate from the plan now, meaning communities could wait for another eight or more years, was unacceptable.

''I don't know where this [questioning of the order] has even come from.''

His suggestion that the mayor, a cyclist who lives on that section, would have something to gain from voting for the Vauxhall-Glenfalloch section to be done first, was shut down firmly by the mayor, who said Mr Clearwater could not presume to know which way he would vote.

Mr Hogan said widening would increase safe access to both the school and the foreshore in Broad Bay, and give new opportunities for physical education. The existing plan should apply. Any other timing option was sending ''all the wrong messages about the importance of communities''.

Mr Hogan was joined by Broad Bay School principal John Goulstone and Portobello School trustee Simon Rhodes as he made his submission.

Mr Fenwick said as a commuter three or four times a week, he avoided the Vauxhall-Glenfalloch section on the homeward ride as it was too busy, and by far the most dangerous section along the whole road.

Mr Morris agreed, saying he frequently witnessed crashes or near misses with cyclists and vehicles.

Robert Thompson, chairman of cycle advocacy group Spokes, said Spokes' committee and membership recognised the ordering choice was not easy, and the ideal solution would be to bring the overall completion date forward several years.

That position is supported by many of the submissions.

If that was not possible, Spokes supported completing the Vauxhall-Glenfalloch section first because it would make the most used and most dangerous section safer, open the peninsula to all, and attract new tourists to go there.

More members of peninsula communities and more cyclists will make verbal submissions today and tomorrow to the council, which will decide on the order of the works next week.