Dunedin city councillors voted yesterday for a one-way George St between Frederick St and Moray Pl and for the traffic to flow north to south in a space shared with pedestrians and cyclists and fostering social interaction. 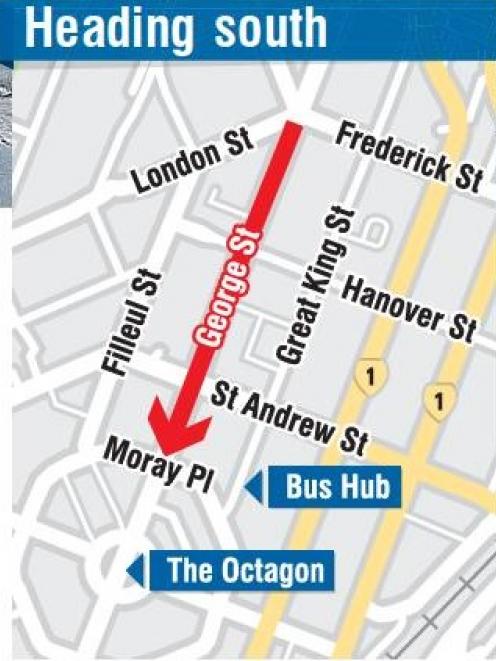 It should be operating from early 2024, after extensive work below and above ground from early next year and following a decade of planning, twists, turns and debate.

‘‘What we want from this is the safest, most accessible, most inclusive, vibrant city centre that we can build,’’ Mr Hawkins said.

‘‘We want a destination for everyone that tells our stories.’’

A one-way George St was the best option available for getting there, he said.

‘‘Why wouldn’t we seize the best opportunity that we have?’’

Replacing old pipes was necessary below ground and a revamp was needed above ground, too, he said.

A detailed business case presented to councillors showed the city’s transport network would be able to accommodate a one-way George St, he said.

Referring to climate change, Mr Hawkins said he did not want to pursue a revamp that ‘‘builds in car dependency for another generation’’.

However, it was not all one-way traffic at a lengthy council meeting yesterday.

Cr Jules Radich led calls for an alternative two-way design, arguing it was preferred by retailers and building owners.

Cr Radich said one-way traffic was the most polarising option and he disputed the claimed safety benefits tied to the concept.

Cyclists being allowed to ride in both directions could create a hazard, he said.

Cr Andrew Whiley noticed a lack of commentary in the business case about how traffic patterns could be affected by construction of the new Dunedin Hospital.

Council infrastructure and development general manager Simon Drew said information about the planned hospital’s entries and exits was not yet known, making traffic modelling difficult, but there was room in the network to accept traffic displaced from George St.

Filleul and Great King Sts are expected to be prominent in this.

Councillors voted 9-5 for one-way traffic in George St and they then voted 11-2 for the direction to be south, towards the Octagon.

Cr Whiley abstained from the second vote and Cr Doug Hall stood aside from the debate and voting.

A southern direction was favoured because it would bring traffic towards the central city and allow for a better solution to the problematic five-way intersection at Pitt, London and Frederick Sts.

Cr Carmen Houlahan said the business community had been asking the council not to press ahead with one-way traffic in George St.

Cr Lee Vandervis said there had been a ‘‘wearing down of wide resistance to changing George St’’.

Cr Steve Walker said motorists using George St as a through route did not get retailers’ tills ringing. 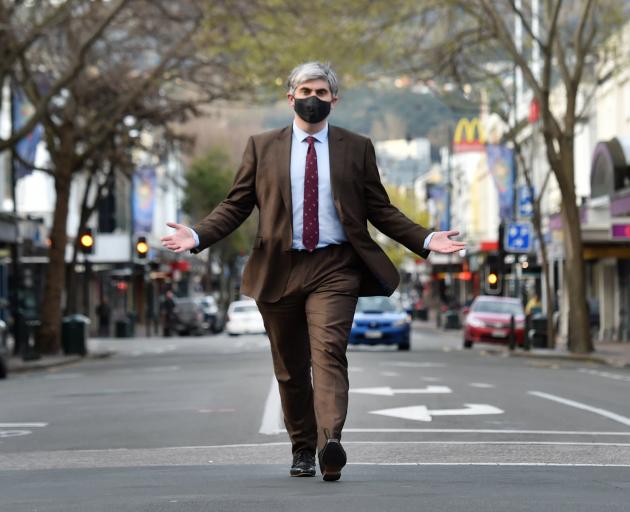 Embracing a one-way future for George St is Dunedin Mayor Aaron Hawkins, approaching the Octagon from the north, as vehicles will be obliged to do from 2024. PHOTO: PETER MCINTOSH

Deputy mayor Christine Garey said one-way traffic was the best option for people who were vulnerable, such as those with disabilities.

Noting the area would need more than the council’s street makeover to be successful, Cr Garey added businesses needed to provide good service.

Various opinions were expressed during a public forum yesterday morning.

He called for a 20kmh speed limit in the street, because the planned 10kmh limit would be unrealistic.

Generation Zero representatives said a one-way George St was an essential step towards a sustainable city.

Making it a ‘‘pleasant location’’ would attract more people to it.

Utter mindless insanity these people should be locked up and the key thrown away.

Hawkins has said there's problem with people being knocked down on George street which is why a one way option is needed.....how many people have been knocked down on George Street by cars? I had no idea it was such a problem. Hawkins is building on the failures of past experiments exploring pedestrianization.

‘We want a destination for everyone that tells our stories.’ just not those in cars, besides just watch those children in the play areas being installed on the street being run over by the cyclists.

‘‘We want a destination for everyone that tells our stories.’’ What form of wokester drivel is this? The council has turned their back on reality and is pursuing an ideology, nothing good will come of this. Just because you have a business case around how this might fit with the hospital build doesn't mean anything is justified, or that it is the best business case.

Just remember the councillors had already ignored their own international expert who recommended a 2 way street design in his report. He favoured the flexibility and pragmatism a 2 way design would give. This would have been a good compromise but they voted against it.

$60 million say it fast and it doesn't sound like its coming out of your pockets and the pockets of your children and very likely their children in a city already in 800 mill of dept. lets crank it to a billion $.. 3-4 years of disruption to the accessibility of the site to look forward to. Barely planned skim thinking in a community with 100 year old infrastructure. But as they say don't let the truth get in the way of a good story. Bulldozer emissions verse 1000 cars gee maths is so hard lets not. Hooray team!

Well, I for one like the idea, there's nothing particularly radical about reducing traffic in shopping streets is there? It's done successfully all over the world, even in temples of Mammon such as New York's Times Square.

Does anyone other than a greens town planner or councillor really believe that a family with parents and children are going to ride a bus from brockville (or anywhere) so children can frolic in the George St playground?

The town planners want the semi mall to be a welcoming spot for all, including those who cannot afford to shop but want somewhere to hang out. Needing to traverse a labyrinth of anti social teen gangs to shop in the area is something most people will want to avoid.

Mind you, even the most optimistic person has to accept that a shady cold streetscape will only be habitable for a few months a year. It is sad that we have so many town planners and councillors who think Dunedin is both flat and has a semi tropical climate.

Do we seriously believe students are desperate to come to George St to find a relaxing place to chill? Has no one seen the public open spaces that litter the campus area - and for most of the year are empty of people.

Sadly this is just the beginning of the death of George St as a retail area. All in the name of greens social engineering.

History will remember Hawkins and his lackeys as doing more damage to Dunedin than any other group.

Oh I don't know, Mayor Chin's stadium has got ongoing consequences for the city to this day. Those responsible were all out having a feed to celebrate last week too.

The next local body elections are Oct next year.

I look forward to finally enjoying the Main Street. The negative noises come from the demographic who dislike change and continue a love affair with their cars. I’ve lived here over 60 years and I cannot recall ever getting or even looking for a park in the Main Street. I’d like to see it entirely car free.

Why not develop somewhere else like the harbour front as a pleasant destination to tell
stories and showcase the city with arts and cafes? The city centre is currently reasonably functional for retail. I am one of those using George st as a through route who often stops for 15-30 mins before or after work to nip into a couple of retail shops for specific things but would rather shop online than go into the meridian multi-storey that adds at least 20mins to any trip. Bad luck city centre retail; if I can’t pull the car over and run in somewhere I’m going online or out of town.

Gonna be good when they make Princess Street a one-way North ... the Octagon will become the roundabout of the century, designed by kindy kids (AKA ... DCC)