The Dunedin City Council has a fight on its hands over its landfill plans as 272 submitters opposed its proposal and only two came out in support.

It received 283 submissions, two were in support, nine were neutral, and 272 opposed, it said.

Opposition to the proposal focused on potential effects on the environment, the nearby community of Brighton, and Dunedin Airport.

Forest & Bird was among submitters opposed the DCC proposal.

It found it "incredulous" that the DCC submitted its original application just days before new national rules came into effect and that it initially sought a limited notification for such a significant development.

"This signals to Forest & Bird that the DCC sees measures to improve the health of waterways and protect wetlands with contempt," it said.

The conservation organisation said significant revisions to the proposal after the DCC’s application was originally lodged also highlighted severe inadequacies of the original application.

The Otokia Creek and Marsh Habitat Trust said it, too, was deeply concerned about the DCC’s application for a landfill in a network of wetlands at the headwaters of Otokia Creek.

Dunedin Airport, the New Zealand Air Line Pilots’ Association and the Otago Aero Club all opposed the application due to concerns that increased bird activity would jeopardise aviation safety.

The Brighton Pony Club said increased traffic and the associated risk to riders, water contamination, pollution, and increased pest numbers were all concerns.

The Department of Conservation was among the neutral submitters.

It said if consents were granted, conditions should be required to protect conservation values, including: water level monitoring in wetlands; water quality and fish and invertebrate surveys; wetland health monitoring; ecological management plans; and provision included to review consents if adverse environmental effects were detected.

Te Runanga o Otakou was one of the two submitters in support of the application.

Its support was subject to the adoption of mitigation measures proposed in an amended cultural impact assessment, it said. 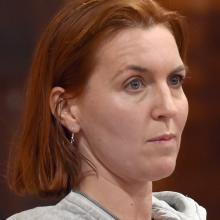 Sarah Ramsay
Big Stone Rd resident Sarah Ramsay organised community meetings in Brighton before and after the DCC lodged its application, and recently a Stop the Landfill Writeathon where about 140 people showed up and made submissions.

If the process had been easier for the community to engage with the number of submissions would have been much higher, Mrs Ramsay said.

"The fact that it was so difficult from an administration perspective and we still managed to get so many formal submissions lodged, goes to show just how much community concern there is about this application."

An ORC spokesman said if the next step was a hearing rather than a pre-hearing meeting, it would likely happen in the second quarter of next year.

There were 146 submitters that indicated they wished to be heard, and they would get the chance to speak to their submission at hearings, the spokesman said.