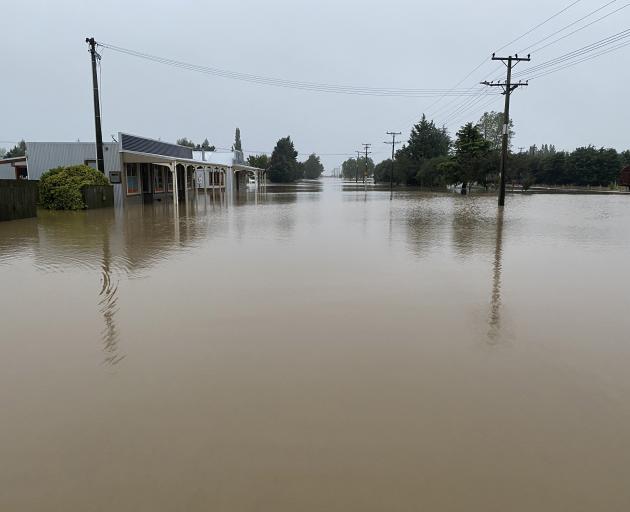 Flooding in Snow Ave, Middlemarch, on January 2. PHOTO: RICHARD EMERSON
A Middlemarch  property owner says work by the Otago Regional Council in March Creek could have intensified the flooding in town at the start of the month.

While the council disputes the claim, it says community knowledge will be part of how it looks to address the town’s flooding concerns.

After three days of heavy rain, the short, steep tributaries of the Taieri River that flow from the Rock and Pillar range were overwhelmed on January 2 and 3.

Floodwater from March Creek, in particular, inundated the town, pouring down the main street on two separate occasions.

Leigh Overton, a Middlemarch property owner for the past 17 years, said the town’s residents were angry the flooding occurred after a perceived lack of action from the council since a major flood in 2018.

Further, a recent scraping of one side of March Creek by the regional council caused the flooding to be more damaging to some residential properties, as the excess soil was put on the high side of the creek, she said.

"This has caused more flooding to occur on the low side."

There were also concerns in town the council had diverted the creek into town without an adequate outlet.

Council engineering manager Michelle Mifflin said in 1995, after floods in the two previous years, the council, along with the Dunedin City Council, worked to reshape and clear the creek channel between the State Highway 87 bridge and the Middlemarch cemetery.

The council was not aware of the creek being diverted into town.

Maintenance done last year was to make sure the creek matched the capacity of a highway culvert.

Ms Mifflin confirmed Ms Overton’s account of the work to shape one side of the creek.

Material from the work was shaped on one side and not considered to be a concern, she said.

The work would allow water to flow beyond the point where it had spilled out of the channel in previous floods.

"While it can be complicated to pinpoint the cause of flooding, we don’t believe this material was a contributing factor, compared with the volume of water entering the creek," she said.

"We are however interested in the observations from the community and these will be taken into consideration when addressing outcomes for Middlemarch."

Flooding may have been from sea levels rising???