The two kiwi chicks which scampered into the bush of Orokonui Ecosanctuary yesterday were the latest in an "essential'' campaign to raise the young birds without the presence of predators.

Two young Haast kiwi, between 50 and 60 days old and weighing about 600g, were transferred to small pens in the sanctuary so they could grow and learn to fend for themselves.

The chicks were transported by Department of Conservation staff from the Haast Tokoeka Sanctuary.

They would be in the pens while they acclimatised and then released into the wider 14ha "kiwi creche'' area.

When they are large enough to fend for themselves in about a year they will likely be transferred to a kiwi sanctuary where predators have not been eradicated. 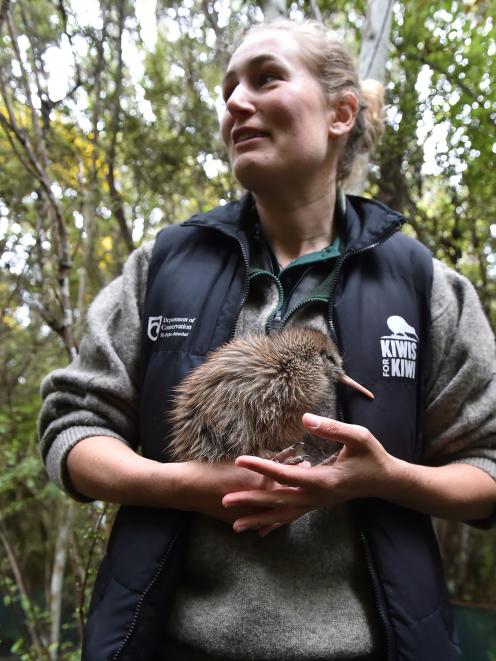 Haast Tokoeka supervising ranger Stacey Lockie holds on to "Gingernut'' before its release into an enclosure at Orokonui yesterday. PHOTO: GREGOR RICHARDSON

Doc biodiversity ranger Jacinda Amey said the campaigns to raise the birds in predator-free zones like Orokonui were "essential'' to the kiwi conservation effort.

"They need that time to grow, and then when they are older they can usually fend off stoats.''

Kiwi had been raised at Orokonui in this way for just over three years after Doc discovered old methods were not working, she said.

In the past, some chicks were raised in small pens in close proximity, which often led to disease.

Haast kiwi numbers are estimated at between 300 and 400.

Orokonui head ranger Kelly Gough said the two chicks released there yesterday were taken as eggs and never interacted with their parents.

The number of kiwi chicks raised in this way at Orokonui was "in the 30s'', she said.

"In here there are quite stunning levels of survivability; in places where pest control hasn't been done or can't be done chick survival is very, very low.''

The chances of a kiwi chick surviving in an area with predators and no traps was less than 5%.