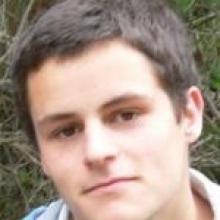 Nick White
University of Otago chemistry graduate Nick White has gained a rare and prestigious scholarship - amounting to more than $70,000 a year - to undertake PhD study at Oxford University.

Mr White (23) will take up the Trinity College Clarendon Bursary later this month.

He will then become a member of the Oxford college, with his study supervised by a leading international chemistry researcher, Prof Paul Beer.

"It's really exciting to have the honour to go there," Mr White said.

It is understood he is the only Otago University student to have gained this chemistry-related scholarship to Oxford in at least the past 10 years.

His Oxford work will involve the design and synthesis of new molecules that could bind to or sense other molecules.

Such binding qualities could have huge environmental significance, potentially being used, for example, in extracting toxic contaminants from waterways and removing radioactive material from radioactive waste.

He worked as a research assistant in Prof Sally Brooker's research group in the Otago chemistry department last year.

Dr Charles Tustin, the Otago University director of graduate research services, said that gaining the scholarship was a "fantastic" achievement, given its high value, prestige and rarity, and given it was overseas-administered.