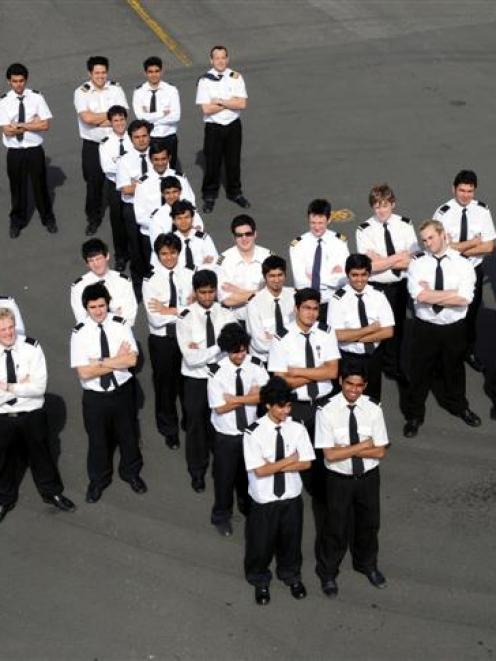 Mainland Aviation College manager John Penno said in his 40 years' involvement in the aviation industry he had not seen such a "continuous shortage of pilots in New Zealand".

Forty students, 20 of them international students from India, were enrolled at the school.

Ten more Indian students would arrive for the summer intake next month.

"Nationwide, it must contribute quite a bit in overseas earnings. We have an agent in India who flies for Kingfisher Air and refers students to us. I'd say 95% have never sat in an aircraft before.

"They know the instruction is good, and they sit all exams in English, like they do in India, so there is never a shortage of students wanting to come here to study."

International pupils spend 12-16 months at the college and pay up to $70,000 to gain commercial airline, multi-engine instrument ratings and instrument flying experience.

"We have it set up like an air force barracks, but without the parades each morning," he said.

Rahul Thakkar (19), of Bombay, said after flight training in New Zealand and further meteorological and instrument exams in India, students could be working as junior commercial pilots within two years.

"The training is of a high standard and the flight conditions are interesting because of mountainous terrain. If you can fly into Dunedin, then you can fly anywhere in the world."

Sven Thelning (21), of Oamaru, said that his two years' training, paid for through the student loan scheme, would cost more than $60,000.

Civil Aviation Authority figures show the number of students from 54 nations (including New Zealand) gaining commercial pilot's licences (CPL) has increased from 481 in 2005 to 568 this year.

Since 2005, 2204 students have gained commercial licences.

In 2005, nine Indian students gained CPL licences in New Zealand; this increased to 80 by August this year.

The International Air Transport Authority estimates that global demand for new pilots will average 17,000 over the next 20 years, a figure that far exceeds the current annual number of pilots gaining commercial licences with the required instrument accreditation needed to fly commercially.

The average EFTS funding per aviation student was $10,342.