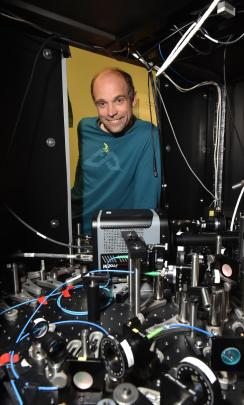 University of Otago researcher Dr Mikkel Andersen with the machine that helped him and fellow researchers control an individual atom. Photos by Gregor Richardson. 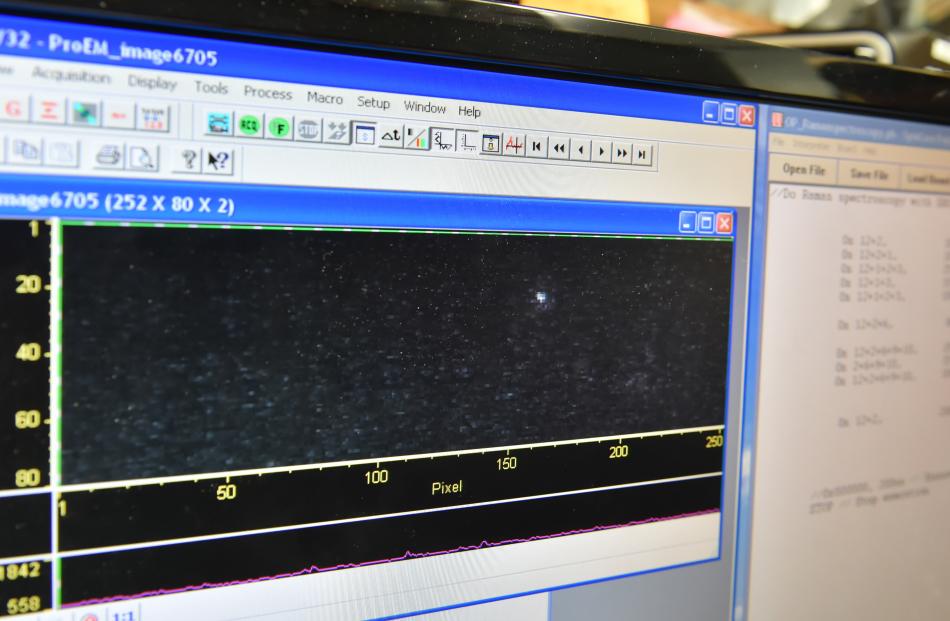 The individual atom appears on a computer screen.

The equipment Dr Mikkel Andersen and fellow researchers have developed to control individual atoms looks like the stuff of historic science fiction.

There are seven lasers and a host of other scientific apparatus in a large machine, and when one researcher let a wire fall in front of a powerful laser it promptly began to smoke in a slightly alarming manner.

But the equipment in a lab in a University of Otago science block has helped Dr Andersen and his team do what has not been done before; control individual atoms, making them appear wherever they want them to.

The accomplishment, by the team of six at Otago's physics department, follows an international breakthrough in 2010 when they isolated and captured a neutral rubidium-85 atom, and then photographed it for the first time.

Dr Andersen, the lead researcher, said in the team's air-conditioned laboratory many kinds of ''noise'', electromagnetic, sound, and temperature contrasts that can affect the equipment and results had been minimised or eliminated.

Laser light was the key to the process.

''We cool the atoms, hold them, change how they affect each other and make them visible by shining laser light, with different frequency and intensity, on them.

''We make repeated use of the phenomenal degree of control one can have over the frequency of laser light, which is a truly astounding feature of lasers.''

Dropping the temperature of the atom to almost absolute zero (minus 273degC), eliminated its ''random wobbling'' allowing it to reach a quantum state with high purity.

The team managed that about a year ago, and the work was about to be published in a scientific journal.

Dr Andersen said the results may be beneficial in the future development of a wide range of technologies, including incredibly fast quantum computers for calculations of extreme complexity.

Pressed on what other applications might be developed, he said it was the sort of question he tried to avoid.

The team was doing ''fundamental science'', and when scientists answered such questions, 30 years later the use of the technology was always something quite different than predicted.

On his feeling when the breakthrough had been made, he said after working towards the outcome for 10 years, it felt ''great to reach a long-term goal''.

However, he did not and would continue the work.

The next steps were investigations of how two atoms being brought together could exchange properties, and building molecules in particular quantum states from individual atoms.

The research was supported by the Marsden Fund, which provided $717,391 over three years.