Ovation of the Seas cancels Dunedin visit after eruption 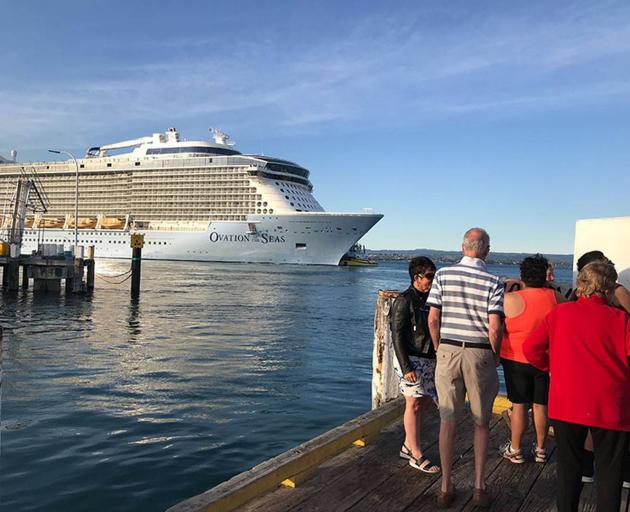 Ovation of the Seas departing Tauranga. Photo: Leah Tebbutt
The Ovation of the Seas' visit to Dunedin has been cancelled after almost 40 of its passengers were caught up in the tragic volcanic eruption on Whakaari/White Island on Monday.

Of the 47 people on White Island during Monday's eruption, 38 were cruise passengers from Ovation of the Seas.

After postponing its departure to help with authorities in the aftermath of the eruption the ship departed Tauranga this morning, but its itinerary has been truncated.

Enterprise Dunedin confirmed its planned visit to Dunedin scheduled for tomorrow had been cancelled and it was also no longer sailing to Fiordland the following day.

TVNZ reported it was heading to Wellington and Picton.

It said on Monday night the captain of the ship made an announcement many people did not return to the boat after the eruption.

The Captain of Ovation of the Seas says the tragedy on White Island is unfathomable. He’s offered his condolences to those families onboard who are affected. Bit surreal onboard this morning @abcnews pic.twitter.com/DCJt8DyCwN

With three last blasts of the horn Ovation of the Seas departed Tauranga early this morning.

Crowds gathered this morning on the wharf to wave goodbye to guests of the Royal Caribbean cruise ship.

It's a quiet and still morning on the water as about 60 people waited to farewell the ship. Crying could be heard on the wharf.

It was a somber mood this morning said one woman. She said usually the ships would play Love Boat with the horn, but this morning the ship was quiet and somber. Cruise passengers can be seen on board their deck, standing and waving back to those at the wharf.

The ship has been docked in Tauranga Harbour for two days and was scheduled to leave the Port of Tauranga at 6.15pm yesterday but this was delayed due to police operational matters.

Yesterday afternoon the booming horn of the ship signalled at 3.59pm, marking the beginning of a moment's silence honouring those ship passengers and crew killed, hurt or still missing from the eruption. It was a moment not seen before at the Port of Tauranga - local Māori, dignitaries plus passengers and crew from a visiting cruise ship collectively praying for calm and healing.

Bay of Plenty Times and ODT