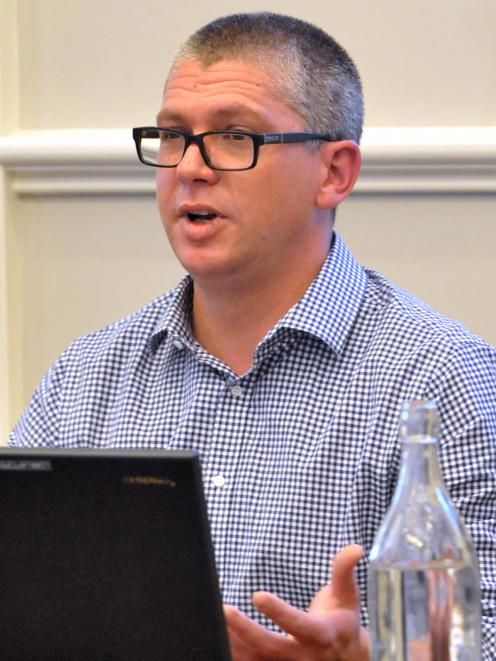 Inner city licensee forum spokesman Richard Newcombe makes a point at the local alcohol policy hearing yesterday. Photo by Christine O'Connor.
It would be difficult to please everybody, Cr Neville Peat said as a Dunedin City Council panel knuckled down to the business of working out a plan to help reduce alcohol-related harm in the city.

After five days of hearing from submitters, the panel of six councillors and chairman Dunedin Mayor Dave Cull now face at least three days of debate among themselves on a policy which could have a big impact on many people.

Starting the discussion yesterday, Mr Cull said the panel needed to come up with a provisional local alcohol policy (Lap) that not only reflected broad community opinion on how to reduce alcohol-related harm in Dunedin, but also one that most people would agree was the most constructive way to go about it.

It seemed likely the panel would also make a separate statement outlining their frustration and desire to have some influence on alcohol pricing, which it had no control over in a Lap.

The subject was a major issue among both pro and anti submitters, on the draft Lap.

Before starting deliberations, the panel was supplied a smorgasbord of statistics by the last submitters to give evidence.

They said regulation was not enough to change the attitude to alcohol in New Zealand, but a precautionary approach was legitimate and they were supportive of a Lap as a mechanism to contribute to reducing alcohol-related harm.

Dr Reid agreed increasing the price of alcohol was a major factor in reducing its harmful consumption, but there was little a Lap could do about that.

''I guess if you want to blame anyone for that, blame Parliament and the politicians who passed that legislation.''

Now, communities had the responsibility to look at what they could do otherwise and a Lap had to send the message Dunedin was serious about tackling alcohol-related harm and the community was not going to accept the current high levels of it.

''It's a message Otago University has sent out with some success, but it's not a message the rest of the city has embraced.''

But economist Fraser Colegrave, who prepared an economic impact assessment of the draft Lap for the Dunedin inner city licensee forum, said the data he could get from police and the health board suggested the city was not that bad in terms of alcohol-related harm.

Much of the board's costs were related to chronic alcoholism, which the Lap would not address and there was no evidence following the introduction of a national closing time last year of 4am, that bringing it forward to 3am would make any difference to alcohol-related harm.

If the Lap's provisions did work, the money saved in hospital presentations would only be a fraction of the cost to the alcohol industry, he said.

Forum spokesman Richard Newcombe said the Lap would never address the bigger, cultural, issue with alcohol, but was likely to seriously affect his and fellow members' businesses.

Earlier, former licensee Richard McLeod said a long-term strategy to create a more cosmopolitan food-oriented environment in Dunedin would be preferable to the ''slash and burn tactics currently tabled''.

The Lap introduced as it was at present would result in for-lease signs across town, rather than a migration to ''tapas and craft beers'', which would take time, but was already starting.

Hospitality New Zealand said the council should treat on-licences as allies and do what it could in the Lap to encourage people into safer drinking environments.

New Zealand's relationship with alcohol was a deep-seated sociological issue, ''and we're not sure there is much councils can do about that'', deputy chief executive Sara Tucker said.

Any change in behaviour required a change in individual responsibility and repercussions, and it favoured bylaws on public drunkenness and better use of law enforcement and licensing authority action.