Intense pressure to resolve the city's parking issues seems set come to a head on Monday, as some Dunedin city councillors plan to push for urgent changes to the new regime.

If accepted, some changes would amount to a U-turn.

The move follows a furious barrage of criticism from city businesses, some of which have claimed to have been pushed to the edge by the new system.

The council's response has been to institute a review, expected to result in a report in November, but with the Christmas shopping season close, some councillors say that will be too late.

An agenda for Monday's council meeting does not advance the situation; instead it notes the complaints received, and suggests the membership of a working party to review the situation.

But Cr Chris Staynes said the council had "sat on our hands" long enough.

He put together recommendations he hoped could be tabled at Monday's meeting, with support from fellow Greater Dunedin councillors Dave Cull and Kate Wilson.

"What we're hoping is there's enough support to put these sort of actions in place," Cr Staynes said.

"The reality is I've been becoming more and more concerned that, as a council, we've been sitting, watching the business district telling us they believe the parking changes are having an adverse effect.

"It may be the effect of the recession, but it seems to be tied to the start of the new parking regime."

Whatever the problem was, the council was not doing enough, and there had been no forum for councillors to discuss it.

Cr Staynes, who will not be in Dunedin for Monday's meeting, said he understood it was not hard to reprogram pay-and-display meters, and it would not take too long to change parking signs on poles.

Whether the recommendations will be subject to a vote is yet to be seen.

Mayor Peter Chin said yesterday it would be his decision under standing orders whether to allow the issue to be added to the agenda.

He would not indicate whether he would support the proposals.

Eight of 11 councillors contactable yesterday supported, or provisionally supported more urgent changes, although there were various ideas about what should be done.

Cr Teresa Stevenson said she planned a consequential motion to reduce the maximum time limits on George St and side streets.

Asked why the Greater Dunedin councillors had waited until this week to raise the issue, Cr Cull said a plan had been put in place, but the responses appeared ad hoc, and the "hubbub" from businesses had not gone away.

The council needed to return the parking regime to the way it was, and then go ahead with the review.

"We thought `this isn't working'. 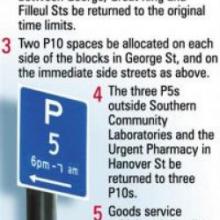 Cr Wilson raised her concerns about the council's processes, and the effectiveness of consultation on the parking issue, and other issues.

She was also concerned some of the outcomes of the parking changes had not been made clear to councillors.

Cr Richard Walls had his own recommendations, which included a 30 or 40-minute time limit on the George St parks, a 1-hour time limit on the immediate side streets, and loading zones for goods and service vehicles only until 10am.

"Even if nothing is achieved by way of resolution, my reasoning is that in considering the item on the agenda, the brief is almost certainly wide enough for council to discuss what has happened and propose urgent matters that the review team should look at," he said.