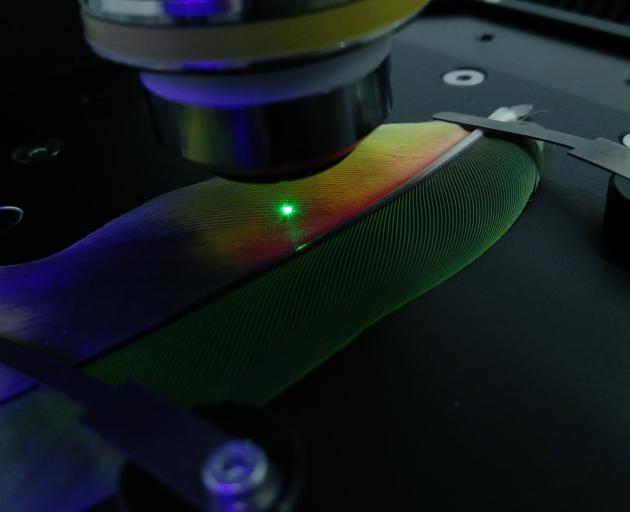 A laser probes a parrot feather, showing its pigment components. Photos: Jonathon Barnsley
Do you ever get in a flap over how vivid feathers can seem?

Does it make you ponder how parrots produce such intensely bright plumage?

A University of Otago-led project may have just helped to solve the latter tantalising mystery. 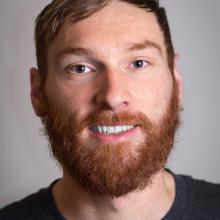 Most birds create such colours by two well-known methods.

Blue, green and purple are generated when light is reflected off microscopic layers in the feathers.

Most other colours, including red and yellow, are made when light is absorbed by chemically different pigments.

But parrots are unusual because their red and yellow feathers contained chemically similar pigments, raising questions about how the colours were produced.

"It certainly has been a mystery for a long time.

He and his team, whose findings have been published in Royal Society Open Science, discovered that red and yellow pigments in parrot feathers interact with light in different ways.

This was possibly because pigment molecules in red feathers were "communicating" with each another. 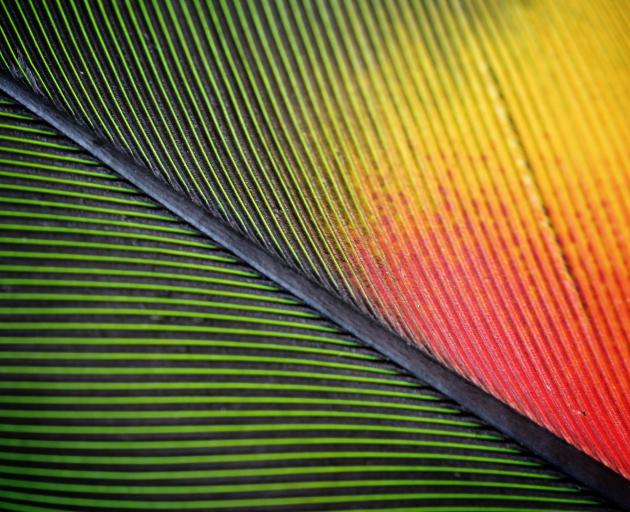 A close-up of a parrot feather.
The researchers probed parrot feathers, using a laser-based technique, which revealed a diverse group of pigment components interacting with one another.

The base colour of these components was actually orange, and they became red only when they were interacting together in the feather.

The researchers found that red pigments had a "diversity of chromophores".

Chromophores are molecules, or parts of a molecule, that absorb visible light.

Chromophore diversity could come about when molecules interacted or communicated with their nearest neighbours to "change how one another absorbs light", he said.

Such colour-tuning was known in crustaceans, but had not previously been observed in feathers, he said.

Co-author Dr Daniel Thomas, of Massey University, said it was possible parrots were able to tune pigments to produce many colours, including the magenta of a galah.

Mr Barnsley said the research was "exciting" and it was "always good to get it out there" through publication.