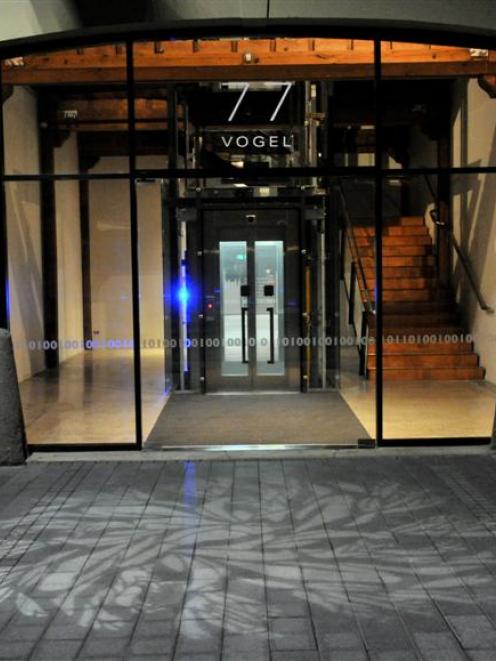 Lights installed in Vogel St, Dunedin, project a pattern on to the footpath. The area will be illuminated tonight as the second annual Vogel St Party gets under way. Photo by Linda Robertson.

And now, to celebrate. Vogel St will come alive with music, artists, food vendors and families today as the community marks the end of the first stage of a Dunedin City Council plan to revitalise the city's historic warehouse area. Debbie Porteous takes a look.

A part of Dunedin that has for years been out of the public eye will be squarely back in it today as people flock to Vogel St to toast recent efforts to bring the warehouse precinct back to life.

It has been three years since the Dunedin City Council approved spending $500,000 of ratepayer money to improve the look of the area, with the aim of encouraging more private investors and those already working in the area to continue fixing up and reusing historic buildings there.

And it seems to have worked as a strategy, but not only thanks to the council. It has worked in conjunction with years of hard work by building owners, heritage enthusiasts and other volunteers who see a bright future for the area and all will enjoy a well-earned party this afternoon.

The area south of the central city, once the commercial and industrial hub of Dunedin, is regenerating, with office workers, residents and art as, slowly but surely, historic warehouses, factories and office buildings are restored and reused.

That effort has in no small part been thanks to investors with vision, willing to spend money on buildings to save them, making them useful again.

And their willingness to do that - even just to tidy up a building and paint its facade - has, in turn, been encouraged and supported, in no small part, by ratepayers.

Heritage incentives were one of the very few initiatives the Dunedin City Council increased the budget for this year.

At $370,000, shared between three projects, it is still only a little money in the scheme of things (especially heritage building redevelopment), but it has been going a long way.

In the past financial year, the owners of eight historic buildings in the southern central city area received reuse grants of between $2000 and $15,000 to assist with renovations.

False facades were removed, real ones were fixed and painted, buildings were strengthened and original features were repaired.

Grants and rates relief for another 13 historic building redevelopments have been approved so far this year.

The council has since added another $80,000 to its $500,000 offering in 2012-13 for its warehouse precinct revitalisation plan, which has been spent in Vogel and Bond Sts tidying up footpaths, planting trees, putting in recycling and rubbish bins, the city's first LED street lighting, cycle racks and locally designed bespoke seating.

It has spent much more fixing waterworks under the streets.

Then there are the volunteers.

A group of street art enthusiasts calling themselves Dunedin Street Art have managed to either raise the money and/or convince building owners to part with cash to fund a series of street murals going up around the area this week and next.

And a group of residents, building owners, other community members and heritage enthusiasts are behind the scenes of today's street party, having helped, or organised sponsors, artists and musicians, events and building tours.

Mixed up in all of those efforts - right down to weeding garden beds before today's party - is Dunedin City Council acting urban design team leader Dr Glen Hazelton.

He thought so much was happening now because people with ideas were, themselves, willing to make their plans happen, rather than waiting for the council or some other group to do something.

The party, which cost the council about $5000, celebrated all that effort and provided an opportunity for all the people involved to show what they had been doing in their buildings, with their businesses or generally in the neighbourhood.

The interest in the party had been ''intense'' and he expected a good turnout.

Steve MacKnight, who is developing his third historic building on Vogel St, said people recognised the potential of the area 20 years ago, but the area was taking off now because there was a group of people willing to get stuck in and tackle their buildings rather than sit back and wait.

''Since people started doing things here, there is a real growing momentum and it's going to keep going.''

Dunedin Mayor Dave Cull said the efforts of people such as Mr Macknight and developer Lawrie Forbes had given others confidence to follow suit and encouraged the council to support those efforts.

It was great to see the area developing, and a lot more had been achieved than he had expected to see in such a short time and with only the relatively small, though significant, council contribution.

The council has a 15-year revitalisation plan for the warehouse precinct.

The street party marks the end of the first stage of the plan.

The budget for and timing of future stages are yet to be confirmed.

Vogel St will be closed to traffic from Queens Gardens to Jetty St.